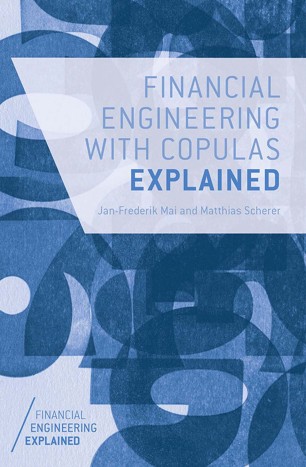 This is a succinct guide to the application and modelling of dependence models or copulas in the financial markets. First applied to credit risk modelling, copulas are now widely used across a range of derivatives transactions, asset pricing techniques and risk models and are a core part of the financial engineer's toolkit.

Dr. Jan-Frederik Mai is Quantitative Analyst at XAIA Investment GmbH. He holds a PhD in Financial Mathematics from Technische Universität München and is co-author of numerous research articles in the field of dependence modeling and of the book Simulating Copulas: Stochastic Models, Sampling Algorithms, and Applications.

'This book is a very valuable source for modeling specialists in the financial industry. It follows a non-technical but mathematically rigorous approach. Many illustrations as well as examples help readers to develop a solid understanding of copula functions and their applications. Especially remarkable are the various parts of the book dealing with the simulation of copulas. In this way the book provides clearly elaborated tools for dependence modeling in financial engineering.'

'Copula functions have been controversial mathematical tools in financial modeling. The example of CDOs is still hot in the public perception and has been debated for several years even in mainstream press. We discussed this ourselves in the 2010 book 'Credit Models and the Crisis'. It is good to see CDOs discussed here at the end of the book. More generally the authors, whose high technical standing in statistical distributions and copula functions is well known, take a middle path between hostility to copulas, stemming mostly from the abovementioned CDO case, and copula enthusiasts, who would like to employ copulas every time a dependence problem shows up.

The wrong way risk pattern for CVA on CDS epitomizes the problems one has when blindly using copula functions without investigating the setting first, as we pointed out with Chourdakis in 2008, and again it is good to see it reported here. Overall, the book is concise but well written, addressing the key questions in copula functions from the start, with a rigorous mathematical approach that does not sacrifice accessibility, and with good reference examples from financial engineering. It is an ideal book to start looking at copula functions for financial engineering with a balanced and technically rigorous perspective, as such it is recommended.'

'This book provides a well explained and broadly accessible introduction to copula models in financial engineering. It joins a rigorous mathematical explanation of the main aspects of copula theory with a series of illustrations, examples and practical aspects that is sure to be appreciated by practitioners. A must-read book to understand the role of dependence in the financial and insurance industry.'

'This book is an excellent first choice and easy-to-read-introduction for all starting the journey into the realm of copulas. But it will be also a great second choice for the many who have found this journey and the theoretical foundations of copulas too complex and intimidating the first time they tried it.'