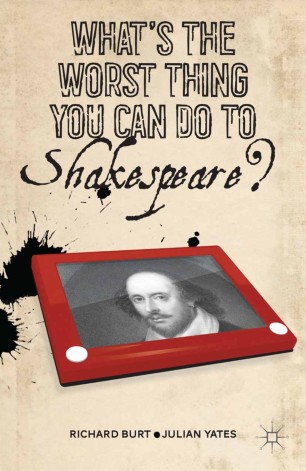 What’s the Worst Thing You Can Do to Shakespeare?

What's the worst thing you can do to Shakespeare? The answer is simple: don't read him. To that end, Richard Burt and Julian Yates embark on a project of un/reading the Bard, turning the conventional challenges into a roadmap for textual analysis and a thorough reconsideration of the plays in light of their absorption into global culture.

"What's the Worst Thing You Can Do to Shakespeare? is written in a refreshing quick-fire style, at times informal and irreverent, but nevertheless engaging, entertaining, and scholarly. Detailed endnotes, including full references of all works cited, a cumulative index of references, and over a dozen well-chosen black-and-white illustrations (mostly screen captures from various media cited in the book) are included." - Parergon

"In What's the Worse Thing You Can Do to Shakespeare?, seasoned icono-clashers Richard Burt and Julian Yates scan the Shakespearean mediascape for its intensities, lags, evasions, and misfires. In wryly techno-savvy readings that cross-cut between the First Folio, conceived as a canny media launch, and contemporary video and film refractions, Burt and Yates renew the enterprise of close reading without either fetishizing the Shakespearean original or exchanging the vertiginous risks of unreadability for quick laughs and easy access." - Julia Reinhard Lupton, Professor of English, The University of California, Irvine, USA and author of Thinking with Shakespeare: Essays on Politics and Life

"A spectacular traversal and updating of Shakespeare's legacy as media event and up-to-the-minute report on traumatic narratives, blatant or concealed, that continue to hound us. I have the chapter on Hamlet's telephone on speed dial. A genuine achievement of boundary-breaking proportions and strong achronicities." - Avital Ronell, University Professor of German, Comparative Literature, and English, New York University, USA

"Shakespeare is in the right kind of danger when he is taken up by the authors of this bracing, shamelessly provocative, and at times charming book. What's the Worst Thing You Can Do to Shakespeare? asks how different media forms have jostled or interrupted our relationship with Shakespeare. Informed by the materialist turn in recent criticism, this book calls attention to the ways in which a variety of media forms - film, audio recordings, digital media, manuscript and print sources - create gaps in the archive that is Shakespeare. Filling, or failing to fill in these gaps, is the subject of this engaging study, which is far from the worst thing you could do to Shakespeare." - Michael Witmore, author of Shakespearean Metaphysics, and, with Rosamond Purcell, Landscapes of the Passing Strange: Reflections from Shakespeare

"This book is useful for readers looking for an alternative interpretation of 'un/reading' than the all-too-common understanding of not reading as some sort of absolute failure or deficiency. Burt and Yates delight in the unreadable spaces that modern media has created in its treatment of Shakespeare's life and works." The Shakespeare Newsletter