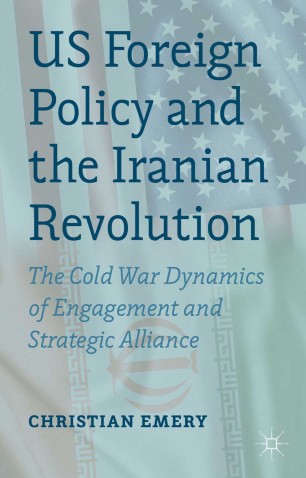 The Cold War Dynamics of Engagement and Strategic Alliance

This book provides a fresh perspective on the origins of the confrontation between the US and Iran. It demonstrates that, contrary to the claims of Iran's leaders, there was no instinctive American hostility towards the Revolution, and explains why many assumptions guiding US policy were inappropriate for dealing with the new reality in Iran.

Christian Emery is a Lecturer in International Relations at the University of Plymouth, UK. He was previously a Post-Doctoral Fellow at the London School of Economics. He is the author of several articles and book chapters on US foreign policy and US-Iranian relations and has written for a variety of mainstream media outlets. He is currently working on a collaborative research project which examines Iranian national role conceptions.

"An impressive, must-read book - every page from Chris Emery offers information and an analysis of US-Iranian relations which avoid simple judgements and offers thoughtful insight instead. This will become the definitive work on America's tense, often disastrous relations with the young Islamic Republic, and it is just as relevant for those considering the wary manoeuvring between Washington and Tehran today." - Professor Scott Lucas, University of Birmingham, UK

"The book represents a much-needed and unbiased analysis of the strategic and domestic pressures driving US engagement with Iran; a book that members of the Obama Administration should read if engagement with Iran is to continue." Luca Trenta, University of Nottingham, UK

"The British scholar Christian Emery, lecturer at the University of Plymouth, has produced a dispassionate, scholarly and balanced account of a very difficult episode in American foreign policy. ... Emery does a great service by stepping back from the polemics and bringing his considerable gifts for clarity and analysis to the question. He shows us that there is plenty of blame to go around on both sides. His cast of characters includes politicians infected with short-sightedness, opportunism and obsessions. It also includes people who sought to do the right thing and struggled to make sense out of events they did not understand. ... Emery, better than many analysts, understands the weight of history." - John Limbert, United States Naval Academy, USA

"Richly detailed and ambitious in scope, US Foreign Policy and the Iranian Revolution will become a standard source for anyone interested in the fascinating story of how and why America's policy of engagement came about." - David Patrick Houghton, King's College London, UK

"The core of [Emery's] book is a dense, granular, and nuanced analytical narrative of the administration's efforts to develop a better relationship with Iran. He sorts through the differing judgments among administration principals and their advisers, as well as historiographical differences among scholars, acknowledging the challenges of engagement and elaborating on contentious points worth debating. ... The book's value comes from the clarity of his exposition, the care with which he constructs his arguments, and the fairness he demonstrates in acknowledging not only the opinions of those with whom he disagrees but also the challenges that confronted policy makers." - Bruce Kuniholm, Duke University, Durham, USA

"Emery's book is very scholarly and is really the best available discussion of U.S. policy toward Tehran in the last two years of the Carter presidency... What is new here is the detailed exposition of policy development. Much of this exposition is striking and original... All in all, US Foreign Policy and the Iranian Revolution is an extremely impressive scholarly achievement. It is provocative, lively, and highly intelligent." - John Dumbrell, Durham University, UK