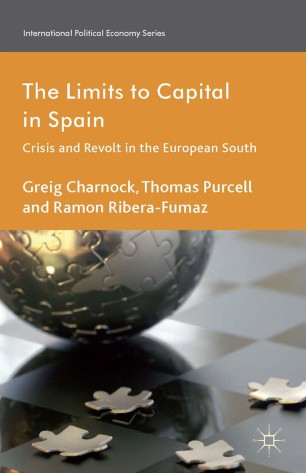 The Limits to Capital in Spain

Crisis and Revolt in the European South

Spain is at the epicentre of a crisis that threatens the future of the Eurozone. This book explains the deep historical and structural roots of the current crisis in Spain. It analyses the nexus between European circuits of financial capital, urbanisation, and the emergent dynamics of state austerity and popular revolt.

Greig Charnock is Lecturer in International Politics at the University of Manchester, UK.

Ramon Ribera-Fumaz is Senior Lecturer at the Universitat Oberta de Catalunya, Spain, and is a researcher at the Internet Interdisciplinary Institute (IN3).

Thomas Purcell is Visiting Scholar at IN3 at the Universitat Oberta de Catalunya, Spain and a member of the Cohabitation Strategies co-operative.

"The authors make good on their promise to show that within its value-theoretic framework 'open Marxism' can address the 'significant structural changes that differentiate the forms taken by capitalism over space and time'. In doing so, they produce a compelling account of the Spanish crisis, tracing it back to specific characteristics and limitations in its post-war development, and following their impact in a deft narrative that situates current class struggles in Spain in interwoven global, regional (EU), national and local context. It represents a considerable advance on rival approaches within comparative and international political economy, and should be compulsory reading for exponents of 'British' and 'American' IPE, or devotees of the 'varieties of capitalism' contrast between liberal and coordinated market economies. Where these approaches simplify the world and obscure the dynamics of change, Charnock, Purcell and Ribera-Fumaz illuminate them by acknowledging its complexity and giving a clear, multi-layered and theoretically informed account of it. Comparative Open Marxist political economy has come of age." - Paul Cammack, City University of Hong Kong

"A very interesting and innovative feature of this book is how the authors combine theoretical developments in international political economy, state theory and urban geography so as to present an insightful account of crisis and revolt in Spain. This is a must read for anyone interested in understanding the past, present and future of capitalism in the European South." - Miren Etxezarreta, Universidad Autónoma de Barcelona, Spain

"An excellent and careful analysis of capital's failure in one of the countries in which that failure is most dramatic. A well-narrated tale that makes it clear that it is time to say goodbye to the hateful world of capital." - John Holloway, Universidad Autónoma de Puebla, Mexico

"The book provides an intrepid and fascinating account, which answers a lot of questions while giving rise to others. Its rapid narrative pace makes it an exciting read, and it creatively combines insights from political economy, state theory, and urban geography." - Antipode