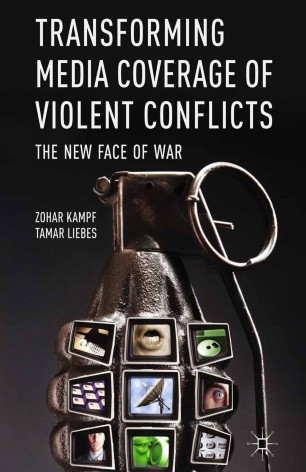 The New Face of War

What links the interviews with Saddam Hussein and Mahmoud Ahmadinejad on British and American TV, the chase of journalists following mega-terrorists, and the new status conferred on ordinary people at war? Transforming Media Coverage of Violent Conflicts offers a timely and original discussion on the shift in war journalism in recent years.

Zohar Kampf is Senior Lecturer of Communication at the Hebrew University of Jerusalem, Israel. He has published widely in leading journals including the International Journal of Press/Politics, Political Communication, Media, Culture and Society, Discourse and Society, Semiotica, Social Semiotics and the Journal of Pragmatics. In 2009 he co-edited with Tamar Liebes a special issue of the Communication Review titled 'Who's the Bigger Brother? How war aggravates the relationships among media, government, and the public'.

Tamar Liebes is Professor of Media and Journalism and holds the Carl and Matilda Newhouse Chair in Communication at the Hebrew University of Jerusalem, Israel. She is author of American Dreams, Hebrew Subtitles: Globalization at the Receiving End (2004); Reporting the Arab Israeli Conflict: How Hegemony Works (1997); The Export of Meaning: Cross Cultural Readings of Dallas (with Elihu Katz, 1992); and editor of Media, Ritual, Identity (with J. Curran, 1998), Canonic Texts in Media Research: Are there any? Should there Be? How About these? (with E. Katz, J. D. Peters, A. Orloff, 2002).