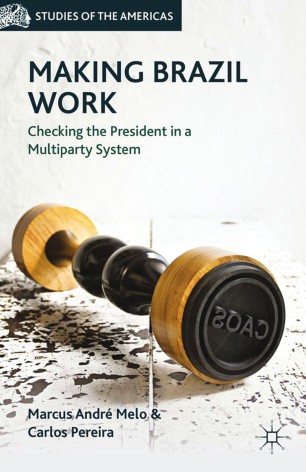 Checking the President in a Multiparty System

This book offers the first conceptually rigorous analysis of the political and institutional underpinnings of Brazil's recent rise. Using Brazil as a case study in multiparty presidentialism, the authors argue that Brazil's success stems from the combination of a constitutionally strong president and a robust system of checks and balances.

Author Marcus André Melo: Marcus André Melo is a professor of Political Science at Federal University of Pernambuco. He is also director of the Center for the Study of Public Policy (NEPPU). Author Carlos Pereira: Carlos Pereira is a professor of Political Economy and Public Policy at the Brazilian School of Public and Business Administration EBAPE at Getulio Vargas Foundation (FGV).

'Making Brazil Work pulls together all the threads of . . . protracted debate [about governance in Brazil] and produces new and important contributions that confirm the relevance of the Brazilian case as a laboratory for the advancement of comparative politics... It shows how the success of coalitional presidentialism is grounded on the strength and effectiveness of checks and balances. The authors make a straightforward theoretical point: Checks on presidential power need to be as strong as that power for coalitional presidentialism to produce stable and effective governments; otherwise, the tools with which presidents build and maintain their coalitions could be easily employed to undermine the democratic regime by concentrating power on the presidency.' Perspectives on Politics

"During the first decade or so after Brazil's return to democracy in 1985, many observers were pessimistic about the country's political institutions. The party system was too fragmented, the legislators too individualistic, the presidency a loose cannon on the ship of state. Yet Brazil's multiparty presidentialism has delivered increasingly effective government. In this book, Melo and Pereira deliver the most comprehensive account to date of how that unexpected result came to pass. The authors' deep knowledge of Brazilian politics is on display on every page, as are keen insights about the varieties of institutional arrangements that can sustain democracy." - John Carey, John Wenthworth Professor in the Social Science, Department of Government, Darthmouth College, USA

"Marcus André Melo and Carlos Pereira provide a blueprint for researching the sources of institutional stability in multiparty presidential regimes. With theoretical breath and empirical care, they debunk old prejudices in regard to the functioning of the Brazilian democracy and prove that multiparty presidential regimes can produce sound, stable, and predictable economic policy outcomes. As they conclusively prove, multiparty coalitions that difficult policy implementation can also be a source of policy stability and consensual change rather than a trigger of gridlock and executive discretion. A brilliant reassessment of the political institutions that have made of Brazil a democratic economic power." - Ernesto Calvo, Associate Professor of Government and Politics, University of Maryland, USA

"This book is of interest to more than just Brazilian scholars or Latin Americanists. Brazil is a country with 26 states plus one federal district that experienced a severe financial crisis in the late 1990s. In its broader consideration of how the country's political system functions, the authors explain how such a complicated set of interests and institutions can work together, and even work well. As the European Union struggles with how to deal with often-similar governance issues with 28 Member States after its own financial crisis, there are plenty of lessons this book provides from the Brazilian experience. The chapter on budgetary and auditing institutions, which provides a fantastic analysis of sub-national level agencies and offers a parallel to debates about fiscal councils in the European context, is particularly good." - Mark Hallerberg, Professor and Director of the Fiscal Governance Centre, Hertie School of Governance, Germany

"In Making Brazil Work, Marcus André Melo and Carlos Pereira have produced a coherent and creative defense of Brazil's political institutions. They carefully demonstrate that Brazil's multiparty presidentialism is not inevitably prone to gridlock and corruption. On the one hand, the President's extensive distributive powers (both jobs and pork) help maintain congressional support. On the other, a robust set of regulatory institutions keeps corruption within manageable limits. In my view, the system works better when the left holds power, because the right has little ideological coherence and can easily be bought off. Only time will tell whether Brazil's institutions will work as smoothly when the opposition is the more ideological and disciplined center-left, but Melo and Pereira have made a strong case for the functionality and creativity of Brazil's system." - Barry Ames, Andrew Mellon Professor of Comparative Politics, University of Pittsburgh, USA

"Melo and Pereira decipher the paradox of Brazilian politics in a way that has important lessons for the study of young democracies generally. How is it that the constitutionally strongest presidents in Latin America are the least prone to the abuse of power? Why do legislators, for whom policy reforms are of only faint political interest, approve far-reaching reforms that promote economic growth? What explains the co-existence of strong and active oversight agencies and political deal-making that often relies on under-the-table transfers? These questions are salient in many countries, but only now find answers in this penetrating book." - Philip Keefer, Lead Economist, Development Research Group, The World Bank

"This book by Marcus André Melo and Carlos Pereira will rank among the major academic publications on contemporary Brazilian politics. Against the tenor of some classical comparative studies of democratic regimes, the authors show how coalitional presidentialism - the governing formula that is likely to emerge in countries that combine separation of powers with fragmented legislatures - has been able to generate effective governance and robust democratic practices in the South American giant since the promulgation of its 1988 Constitution. Key to this outcome is not only the deft use of the president's toolbox - cabinet appointments, ideological pacts, decrees, and budget allocations - but also the presence of solid judicial and checks-and-balance institutions (for example, regulatory agencies and audit tribunals). Thus, Melo and Pereira are among the very few political scientists to systematically integrate the study of executive-legislative relations with the analysis of such institutions in Brazil - both at the national and subnational level. This outstanding scholarly achievement will be relevant to students of Latin American politics in particular and of democratic political institutions in general." - Octavio Amorim Neto, Associate Professor of Political Science, Brazilian School of Public and Business Adminsitration, Getulio Vargas Foundation, Brazil

"Accountability in presidential democracies has been studied largely on the familiar terrain of executive-legislative relations, yet the map of accountability has never been fully unfolded. This book fundamentally widens the debate. Looking beyond Congress, Melo and Pereira successfully highlight a wide range of less visible institutions that have emplaced an authentic web of checks and balances within Brazilian democracy. Brazil has a powerful and proactive presidency, but one that must answer to numerous non-legislative and non-partisan actors." - Timothy Power, Professor and Director of Graduate Studies in Politics, University of Oxford, UK