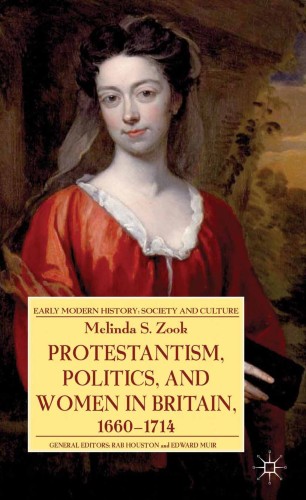 This compelling new study examines the intersection between women, religion and politics in the late seventeenth and early eighteenth century in Britain. It demonstrates that what inspired Dissenting and Anglican women to political action was their concern for the survival of the Protestant religion both at home and abroad.

Melinda S. Zook is Associate Professor of History at Purdue University, USA, and the author of Radical Whigs and Conspiratorial Politics in Late Stuart England (1999). She also co-edited Revolutionary Currents: Nation-Building in the Transatlantic World (2004) and the forthcoming, Challenging Orthodoxies: Social and Cultural Worlds of Early Modern Women (2014).