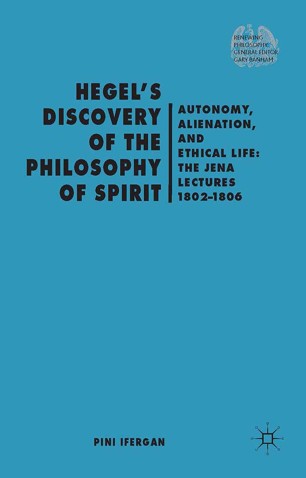 Hegel’s Discovery of the Philosophy of Spirit

Autonomy, Alienation, and the Ethical Life: The Jena Lectures 1802–1806

This exploration of Hegel's critique of the individualistic ethos of modernity and the genesis of his alternative vision traces the conceptual schemes Hegel experimented with to show how he settled on the concepts of 'ethical life' (Sittlichkeit) and Spirit as the means for overcoming subjectivity and domination.

Pini Ifergan teaches philosophy at Bar-Ilan University, Israel. Author of The Tragedy in Ethical Life: Hegel's Philosophy and the Spirit of Modernity (2010), he has also edited, annotated, and written interpretive introductions for Hebrew translations of several philosophical classics, including Hegel's Philosophy of Right (2011) and Spirit of Christianity and Its Fate (2005); and Kant's Conflict of the Faculties (2007). He is currently working on a book about the philosophy of Hans Blumenberg.