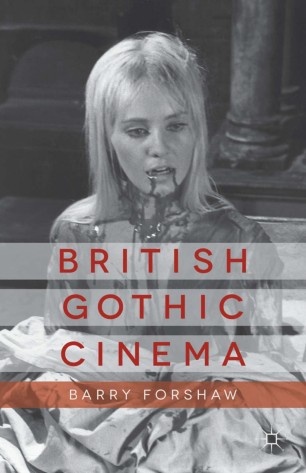 Part of the The Palgrave Gothic Series book series (PAGO)

Barry Forshaw celebrates with enthusiasm the British horror film and its fascination for macabre cinema. A definitive study of the genre, British Gothic Cinema discusses the flowering of the field, with every key film discussed from its beginnings in the 1940s through to the 21st century.

Barry Forshaw's books include Death in a Cold Climate, British Crime Film, The Rough Guide to Crime Fiction, Italian Cinema, British Crime Writing: An Encyclopaedia , and a biography of Stieg Larsson. He has written for a variety of newspapers, Crime Time, and is a talking head for ITV author profiles and BBC documentaries.

'As always, Barry Forshaw brings his knowledge, intelligence and, above all else, passion to a volume that expertly offers fresh insights into an often neglected sub-genre of British cinema.' - Stephen Jones, award-winning horror writer and editor

'Once again, Forshaw gets under the skin of a topic, revealing new layers of underappreciated and well-known works. The writing is accessible and informed, dripping with detail, drawing on often surprising, striking and illuminating literary comparisons. At last, through Forshaw's critical insight, British Gothic cinema is brilliantly re-animated.' - Dr Steven Peacock, Reader in Film and Television Aesthetics, University of Hertfordshire, UK

'An invaluable overview of the Gothic tendency in British cinema, full of fresh perceptions and quirky insights that draw on Barry Forshaw's considerable cultural range.' - Ramsey Campbell, writer (The Grin of the Dark), film critic and editor

'This unapologetic assessment of homegrown screen Gothic celebrates with not only suitably pugnacious writing but the necessary affection for the dark and vivid made flesh. As perceptive and entertaining as it is exhaustive, Barry Forshaw's study marries erudition with a genre fan's obvious relish, and leaves no coffin lid unturned, no bosom unheaved.' - Stephen Volk, screenwriter (Ghostwatch, The Awakening, Gothic)

'A red-blooded history of British horror film, hats off to Barry Forshaw, who in British Gothic Cinema describes what we are in fact best at which is circuses of horrors, houses that dripped blood, and beasts in cellars.' - The Times

'A celebration of the UK's horror film industry out in time for Halloween. Forshaw traces the genre from the Forties through such films as Dr Jekyll And Mr Hyde, Witchfinder General, 28 Days Later and Kill List. Vampires, werewolves and spectres abound. And of course there's the rise of the Hammer Studios from the coffin of obscurity.' - Daily Express

'British Gothic Cinema is well-informed and breezy, mapping the territory from the literary origins of the Gothic inventions most beloved of cinema, Dracula and Frankenstein, to the present day resurgence.' Splice 7.1 (2014)