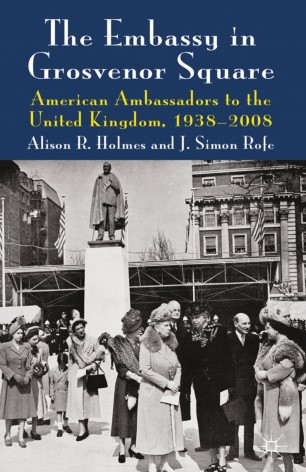 The Embassy in Grosvenor Square

Covering the period 1938 to 2008, The Embassy in Grosvenor Square explores the role of the embassy in the Anglo-American 'special relationship', both in terms of transatlantic affairs and issues of international relations.

"Kennedy is the earliest of the 20 US ambassadors to Britain to be scrutinised by the book's co-editors, Dr Rofe, and Dr Alison R. Holmes of Humboldt State University, and their team of fellow academics. They focus on the period 1938-2008, they say, because it 'covers the lifespan of the much debated term 'the special relationship' from its birth although not its conception in the Second World War and its aftermath, to the challenges of globalisation in the present day'. The Times

"Despite the long-running debate over the nature and significance of the Anglo-American 'special relationship,' historians have not until now had a comprehensive view of Washington's ambassadors in London. The sixteen well-written and impressively researched essays in this volume offer a fascinating perspective on diplomacy as practiced by governments that have remained close despite their many spats. This is a book that should appeal to general readers as well as to scholars and students." - Frank Costigliola, University of Connecticut

"...this is an excellent book, which will be very useful not just for the [...] group of people interested in the Embassy but also anyone interested in Anglo American relations since 1938 and US foreign policy in general." - Andrew Williams, University of St Andrews

"Never before has a collection been compiled that has such range and detail on the work of US ambassadors in London as this. The two editors have done an immensely valuable job in assembling a group of well-known scholars who help to fill an important gap in our understanding of Anglo-American relations." - Alan Dobson, University of Dundee

"Holmes and Rofe have gathered an impressive group of scholars (editors included) to explain the complexities of that diplomacy and the context of Anglo-American relations. A great taste of London's 'Little America'" - Michael Patrick Cullinane, Northumbria University, Times Higher Education

'This is a very useful book, and not just for those who have an interest in Anglo-American relations. Collectively they [the contributions] illuminate how much has changed in American diplomacy over the past seven decades and how much has not. The book is also a good reminder that even the best of friends often have profound differences.' Dennis Jett, The Foreign Service Journal