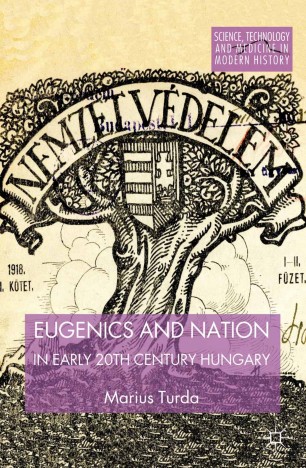 Part of the Science, Technology and Medicine in Modern History book series (STMMH)

In 1900 Hungary was a regional power in Europe with imperial pretensions; by 1919 it was crippled by profound territorial, social and national transformations. This book chronicles the development of eugenic thinking in early twentieth-century Hungary, examining how eugenics was an integral part of this dynamic historical transformation.

Marius Turda is Reader in 20th Century Central and Eastern European Biomedicine at Oxford Brookes University, UK and the founding Director of the Cantemir Institute at the University of Oxford. His recent publications include Crafting Humans: From Genesis to Genetics and Beyond (2013) and Modernism and Eugenics (Palgrave Macmillan, 2010).

“Turda has produced an extremely detailed account of the development of eugenics in Hungary, highlighting the independent and innovative approach Hungarian eugenicists took to adapting international eugenics ideas to local concerns and demonstrating the importance of eugenics to Hungarian history. The study also provides a significant example of the nationalization of science in Central Europe … . successfully demonstrates the contributions of Hungary to the broader international culture of eugenics and provides a valuable point of comparison in that area.” (Sacha Davis, H-Nationalism, networks.h-net.org, March, 2017)

“It is a thoroughly researched, thought-provoking and highly illuminating study. … Turda’s book is a significant addition to the social, political, and intellectual history of Hungary … . The monograph’s accessible language makes sure that Eugenics and Nation is enjoyable not only for scholars but also for those who are not engaged in academic study but would like to know more about the history of eugenics or the intellectual landscape of Hungary at the beginning of the twentieth century.” (Boglárka Kiss, Hungarian Studies Review, Vol. 43 (1-2), 2016)

“The book is an excellent overview of the micro-reality of the theory and practice of eugenic and racial thought in Hungary. A century later we are still shocked by a superstitious understanding of science and by the authority of the state to decide the value of people in terms of their blood rather than their knowledge or any other human value ... .” (Translated from Hungarian, Mihály Szilágyi-Gál, Múltunk, Issue 1, 2016)

"This impressive study comes as a prequel to a number of other studies by the prolific historian Marius Turda, which focused on questions of race and nationalism in the history of twentieth century central Europe. If several of his previous works interrogated incisively the ideas and impact of eugenics in interwar Hungary, Romania and more broadly in the post-Hapsburg countries, this latest publication focuses on the origins of these ideas, starting roughly in 1900. Eugenics and Nation is a work of thorough research, as anyone reading Turda's earlier work has come to expect. He has scoured the relevant archives and has an excellent command over all the languages needed to do a project like this justice." (Social History of Medicine)

"In sum, [the book] discussed here represents a significant contribution on the history of eugenics and physical anthropology in Central Europe ... In Eugenics and nation, Turda draws on an impressive amount of sources to make a strong case for the sophistication of Hungarian debates on eugenicsand the excitement around the possibilities for social and biological improvement that came along." (Studies in History and Philosophy of Biological and Biomedical Sciences)

"The history of Hungarian eugenics of course is more intricate, challenging and illuminating than that we could possibly give it justice in our short notes. Those who read Turda's superb book, can get acquainted not only with the hitherto almost completely unknown history of Hungarian eugenics, but can also acquire a very nuanced picture about the Hungarian political thinking of the interwar period. [...] It is a special merit of the author that he is capable of reflecting so sensitively on those specifically Hungarian life situations, desires, hopes, experiences and fears, which determined so tragically the fate of this branch of science and the [Hungarian] nation." (Orvostörténeti Közlemények)

"[A]n important contribution to the history of eugenics ... By shifting the temporal focus of historical enquiry into eugenics and nation from the interwar era to the pre-war years, Turda skilfully demonstrates the prevalence of eugenic reasoning in nation-building on the one hand, and its importance in developing scientific answers to the manifold challenges of modern societies on the other. The book may therefore be of interest to historians of modern Hungary, historians of eugenics and historians of science and medicine who focus on national and international professional networks and the question of disciplinary boundaries." (Medical History)