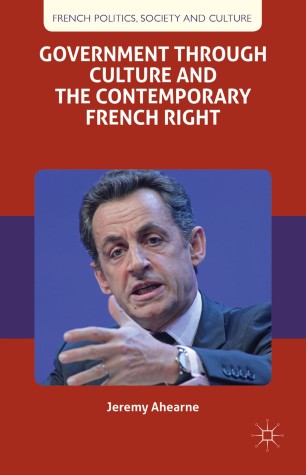 Government through Culture and the Contemporary French Right

Culture, understood broadly, lay at the heart of contrasting right-wing strategies for government in France during the pivotal decade of 2002-2012. Looking at issues of secularism, education, televisual performance, public memory and nation-branding Ahearne analyses how presidents Chirac and Sarkozy sought to redefine contemporary French identity.

'This is a thought-provoking study of selected policy themes and symbols given prominence by Presidents Chirac and Sarkozy in their attempt to shape the ideational environment of contemporary France. Ahearne sheds new light on the French right's capacity

to embed its values in the nation's political culture.'

'This is an original study of the more recent paradigmatic shifts in French political culture through the Chirac and Sarkozy presidencies (2002 12). Jeremy Ahearne flags up areas which represent strategic stakes in right-wing governmental endeavours to 'govern through culture'. Various key areas such as political secularism (laïcité), education, national television, national history and France in the world are discussed. This volume provides stimulating analysis to understand how the French right constructed and won political hegemony. Both presidents played on the tensions existing between the values of economic liberalism and of social conservatism. The author convincingly argues that those right-wing 'cultural frames' are now a firmly embedded feature of the French political landscape. This is an enlightening study to grasp the ideational changes that have recently taken place in

French politics, their impact and durability.'

'This penetrating but gratifyingly limpid analysis of right-wing cultural thinking in France since 2002 combines the best of contemporary political and cultural history with the methodical unpicking of discursive practices that characterises French cultural studies. Ahearne's concept of 'government through culture' extends our understanding of French 'cultural' policy far beyond the arts and the Ministry of Culture to embrace more diverse, less visible spheres of cultural influence. In the process, he demonstrates how the French presidency has become a unifying focus within this diversity and he identifies the key conceptual and rhetorical patterns that distinguish presidential discourses of the right today.'