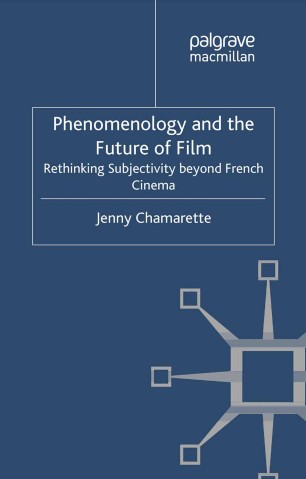 Phenomenology and the Future of Film

Using hybrid phenomenological approaches to film, this book focuses on how moving images are 'experienced' and 'encountered' as well as 'read' and 'viewed'. Its close engagements with films and installations by four contemporary French filmmakers explore the limits and possibilities of 'cinematic' subjectivity.

Jenny Chamarette is Lecturer in Film Studies at Queen Mary, University of London, UK. Formerly a Research Fellow at Fitzwilliam College, Cambridge, her work concentrates on intermediality, phenomenology and affect in visual culture. She has published previously on theorizations of photography, film and installation art in France, Europe and North America.

An important addition to the recent trend of phenomenological approaches to film,Phenomenology and the Future of Film offers a thoughtful exploration of cinema and the cinematic experience as revelatory of our enworlded, intersubjective way of being

and of making sense. In its articulation of key theoretical debates on temporality, perception, embodiment and subjectivity, as well as in its discussion of a series of works by French fi lmmakers and artists who engage with the medium of the moving image in its new diverging forms, the book is both illuminating and wonderfully engaging.' Martine Beugnet, Professor in Visual Studies, University of Paris 7, Paris, France

'Thinking subjectivity cinematically, as Jenny Chamarette does here, may be the most fruitful way to think it, given that humans have evolved inseparably from cinematic forms for more than a century: cinema, itself constantly changing, elicits a subject that is also keenly open to transformation and fl ow. Chamarette builds her argument with delicate precision and a thorough grounding in the history of fi lm theory and its related philosophical movements. By bringing acute perception and fertile contexts to works by some of our most beloved fi lmmakers, she creates cinematic experiences that are thrillingly fresh.' Laura U. Marks, Dena Wosk University Professor in Art and Culture Studies, Simon FraserUniversity, Vancouver, Canada