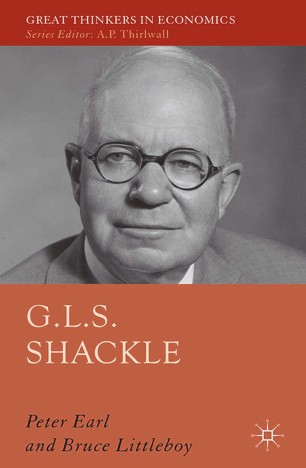 This is an intellectual biography of G.L.S. Shackle, economic theorist, philosopher, and historian of economic theory. It explores how Shackle challenged the aims, methods and assumptions of mainstream economics. He stressed macroeconomic instability, and developed a radically subjectivist theory for behavioural economics and business planning.

Peter Earl is a former co-editor of the Journal of Economic Psychology and is Associate Professor of Economics at the University of Queensland, Australia. His many books include Economics as an Art of Thought: Essays in Memory of G.L.S. Shackle (2000) (editor, with Stephen Frowen).

Bruce Littleboy is Senior Lecturer in Economics at the University of Queensland, Australia. He wrote On Interpreting Keynes (1990) and was awarded a Shackle Studentship at St Edmund's College Cambridge in 2011.

“This intellectual history of the English economist George Lennox Sharman Shackle is part of the Great Thinkers in Economics series. … this book provides a very good introduction to Shackle’s central concern–his theory of choice under uncertainty–and provides an excellent starting point for anyone wishing to become familiar with this important heterodox thinker.” (Gene Callahan, Journal of the History of Economic Thought, Vol. 38 (4), December, 2016)
Buy options