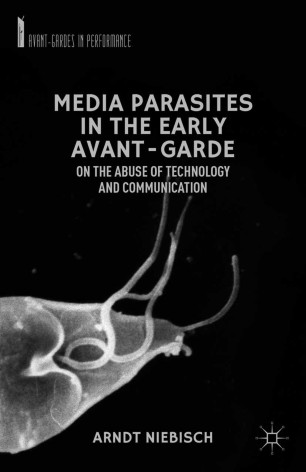 Media Parasites in the Early Avant-Garde

On the Abuse of Technology and Communication

Part of the Avant-Gardes in Performance book series (AGP)

Niebisch retraces how the early Avant-Garde movements started out as parasites inhabiting and irritating the emerging mass media circuits of the press, cinema, and wired and wireless communication and how they aimed at creating a media ecology based on and inspired by technologies such as the radio and the photo cell.

Arndt Niebisch is an assistant professor in the Department of Languages, Literatures and Cultures at the University of North Carolina at Greensboro, USA.

"Media Parasites in the Early Avant-Garde is a highly original study combining three areas of research that should have been merged long ago: Michel Serres' theory of the parasite, Friedrich Kittler's contribution to our understanding of the military origins of modern media, and historical analyses of Dadaism and Futurism. Giving a new twist to an old story, Niebisch turns heroic rebel-artists into profiteers of media parasitism: the new technologies create the disturbances that are then refunctionalized and codified as art." - Geoffrey Winthrop-Young, professor, German Studies, University of British Columbia

"Cultural analysis at its best: this book suspends the study of media culture from technological determinism by focusing on 'parasitic' uses and creative misuses of new technologies in early 20th century avant-garde e.g Futurism, Dada, while at the same time cross-checking such media artistic practices against the engineering evidence. Some hitherto neglected or even unknown discoveries from the archive are being revealed, ranging from poetical and optical to acoustic (and even 'optophonetic') devices. Thus the reader is provided with rich material and suggestions to judge himself if 'noisy' avant-garde uses and modifications of technology are indeed 'subversive' interventions in the cultural order and in the ecology of media, or if they act on a just metaphorical level." - Wolfgang Ernst, chair of Media Theories, Humboldt University, Berlin