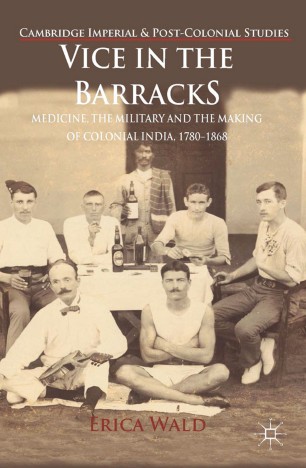 Vice in the Barracks

Shortlisted for the 2014 Royal Historical Society’s Gladstone Prize and the 2014 Templer Award for the Best First Book by a New Author.
Sex and alcohol preoccupied European officers across India throughout the nineteenth century, with high rates of venereal disease and alcohol-related problems holding serious implications for the economic and military performance of the East India Company. These concerns revolved around the European soldiery in India – the costly, but often unruly, 'thin white line' of colonial rule. This book examines the colonial state's approach to these vice-driven health risks. In doing so it throws new light on the emergence of social and imperial mindsets and on the empire, fuelled by fear of the lower orders, sexual deviation, disease and mutiny. An exploration of these mindsets reveals a lesser-explored fact of rule – the fractured nature of the Company state. Further, it shows how the measures employed by the state to deal with these vice-driven health problems had wide-ranging consequences not simply for the army itself but for India and the empire more broadly. By refocusing our attention on to the military core of the colonial state, Wald demonstrates the ways in which army decision-making stretched beyond the cantonment boundary to help define the state's engagement with and understanding of Indian society.