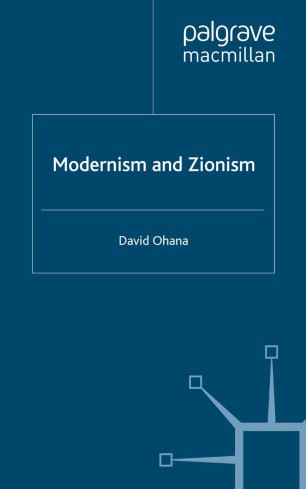 Part of the Modernism and … book series (MAND)

Part of Palgrave's Modernism and ... series, Modernism and Zionism explores the relationship between modernism and the Jewish national ideology, the Zionist movement, which was operative in all areas of Jewish art and culture.

DAVID OHANA Professor of Modern European History who specializes in comparative national mythologies. He has been affiliated with the Hebrew University, Jerusalem, Israel, Paris-Sorbonne, Harvard University, and the University of California at Berkeley. He teaches at Ben-Gurion University of the Negev, and he is a Senior Fellow at the Ben-Gurion Institute for the Study of Israel and Zionism. The most recent of his many publications are Political Theologies in the Holy Land (Routledge 2009), the trilogy The Nihilist Order (Sussex 2009 -2010), Israel and Its Mediterranean Identity (Palgrave-Macmillan 2011), and The Origins of Israeli Mythology (Cambridge 2012).