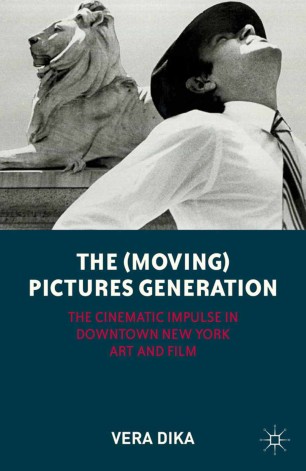 The Cinematic Impulse in Downtown New York Art and Film

Beginning in the late 1970's, a number of visual artists in downtown New York City returned to an exploration of the cinematic. They engaged cinematic movement, time, and the body in their work, and did so across mediums - utilizing not only film, but sculpture, drawing, photography, and performance. The cinematic impulse was evidenced in the high art of Jack Goldstein, Robert Longo, and Cindy Sherman, and in the film practices of "No Wave" filmmakers Amos Poe and Vivienne Dick, and the feature films of Kathryn Bigelow. Vera Dika considers the work within a greater cultural context and probes for a deeper understanding of the practice.

Vera Dika is Associate Professor of Film Studies at New Jersey City University, USA. She is the author of Recycled Culture in Contemporary Art and Film: The Uses of Nostalgia (2003) and a founding editor of Millennium Film Journal.

"An intensive study of important activities in the New York art world of the late 1970s, this book manages the tricky feat of being at once broad in its concerns and concentrated in its attention to key figures, works, and propensities within an informal yet clearly identifiable movement. Dika gives an enlightening and edifying account of an art movement that has never been more vividly evoked and thoughtfully interpreted. This book constitutes a major intervention in the field." - David Sterritt, Columbia University, the Maryland Institute College of Art, and chair of the National Society of Film Critics

"Beautifully written, The (Moving) Pictures Generation is the best single text on this era of the US avant-garde cinema. Dika's brilliant research brings developments in cinema, art, and music in late 70s downtown New York into a common focus, and situates the innovations in filmmaking in the traditions and theoretical heritage of the classic avant-garde." - David E. James, School of Cinematic Arts, University of Southern California, USA and author of The Most Typical Avant-Garde: History and Geography of Minor Cinemas in Los Angeles, and co-editor of Alternative Projections: Experimental Film In Los Angeles, 1945-1980
Buy options