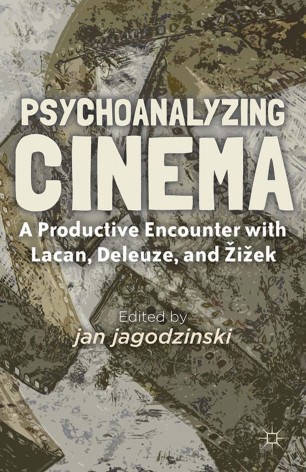 A Productive Encounter with Lacan, Deleuze, and Žižek

The essays within this collection explore the possibilities and potentialities of all three positions, presenting encounters that are, at times contradictory, at other times supportive, as well as complementary. The collection thereby enriches the questions that are being raised within contemporary cinematic studies.

"This impressive collection of essays explores the critical insights of three major theorists of cinema, psychoanalysis, and philosophy . . . Nine essays by leading scholars . . . constitute the collection, with an excellent introduction by editor jagodzinski. The rich essays cover the terrain of cinematic studies from both the psychoanalytic and schizoanalytic perspectives, exploring the intersections between cinema and philosophy in such areas as ethics, identity politics, love, trauma, and perception. Particularly noteworthy is the essay by Todd McGowan on Deleuze and Jean-Luc Godard's films. This volume will be very useful to students and film studies scholars, as well as those interested in philosophy and psychoanalysis and the rich possibilities opened up by their conceptual intersections. Summing Up: Highly recommended. Upper-division undergraduates and above." - CHOICE

"This is a wonderfully innovative and insightful collection, containing work from scholars of the highest calibre exploring the intersections between cinema, psychoanalysis and philosophy. Psychoanalyzing Cinema demonstrates the rarely discussed connections between Lacan, Deleuze, and i ek, producing startling film-philosophical insights into the nature of our existence - in a universe conceived of as light or metacinema; in relation to time, trauma and national identity; ethics; love; perception; ideology; politics; and zombie apocalypse." - David Martin-Jones, senior lecturer in Film Studies, director of the Centre for Film Studies, University of St. Andrews, and author of Deleuze and World Cinemas

"The relationship between psychoanalysis and schizoanalysis remains one of the most tantalizing, and least resolved, questions in contemporary film theory. With this collection, which brings together notable scholars from both sides of the equation, editor Jan Jagodzinski has provided arguably the first rigorous reckoning with the cinematic conjunction of Lacan and Deleuze." - Gregory Flaxman, Associate Professor, University of North Carolina, Chapel Hill