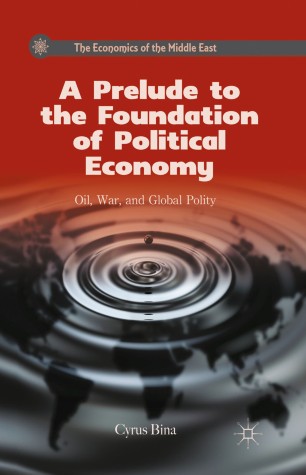 A Prelude to the Foundation of Political Economy

A Prelude to the Foundation of Political Economy is a groundbreaking volume of theory and strategy on political economy and polity of the twenty-first century. Distilled in concrete terms, it elucidates the enigma of oil in view of the centrality of global social relations.

Cyrus Bina is Distinguished Research Professor of Economics at the University of Minnesota (Morris Campus), USA. He is the author and co-editor of several scholarly books, including The Economics of the Oil Crisis, Oil: A Time Machine, and Alternative Theories of Competition: Challenges to the Orthodoxy; and has written more than two hundred scholarly and policy pieces. He has also spoken extensively to the international media on issues pertinent to global sea change. He is currently editing a three-volume work entitled International Economics: An Encyclopedia of Global Trade, Capital, Labor, Technology, and Innovation. Bina is a fellow of Economists for Peace and Security, and an editor for the Journal of Critical Studies in Business and Society.

"Bina uses his skills as an economist and his career research background as an oil expert to provide both a plethora of interesting information and acute analysis. . . . The study is well framed conceptually and grounded on thorough research. The sections on cartels and 'rent' add an important dimension to the field of oil economics." - Recommended in CHOICE

"The new book by Professor Bina places the trade in and production of petroleum into their global context, and relates them to changing conditions of political power at the international level. One need not be an expert to understand and appreciate the important arguments in this book." - John Weeks, Professor Emeritus of Economics, University of London, UK

"This is a seminal work which demonstrates in convincing fashion, both in the abstract and concrete simultaneously, that the world is a different place since the 1970s; and, it needs to be understood as such. Conventional understanding of competition, imperialism and U.S. hegemony are seen as outdated; and policy prescriptions like, 'energy independence' and 'war for oil' delusional. If one wants to truly understand the history of oil within the context of capitalist development with all its economic and political ramifications this is the book to read." - Chuck Davis, Professor of Labor Studies, Indiana University, USA

"Cyrus Bina is a renowned expert on the economics and geopolitics of energy and of regional conflict. In this fascinating new book, he weaves together a grand narrative in which the history of oil, resource boon for some and curse for others, becomes a critical lens through which one can view postwar history. The cartelization of oil in the early phase runs parallel to American ascendancy, the oil crisis ushers in the crisis of advanced capitalism, and the subsequent decartelization and globalization of oil production runs side by side with the decline of US power. He argues that in the end Fukuyama's claim of the 'end of history' should be stood on its head: the history that has ended is that of American Hegemony, undone by the consequences of its manifold interventions and depredations." - Anwar Shaikh, Professor of Economics, New School for Social Research, USA