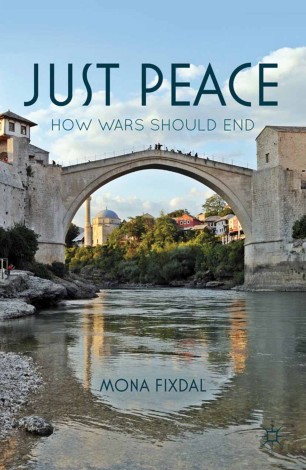 How Wars Should End

Drawing on many of the wars and peaces of recent decades, this book offers a persuasive new perspective on postwar justice. In her analysis wars of succession, wars for territory, and the political institutions that precede and follow wars, Fixdal explores the outer limits of the idea that it is worth paying almost any price for peace.

Mona Fixdal is a researcher in the Department of History, University of Oslo, Norway.

"Rooted in centuries of Western thought on peace, justice, and stability as morally acceptable outcomes of war, Mona Fixdal's breath-taking analysis focuses on questions that must be asked in generating a body of thought around terms of just and lasting peace. Her book should stand as the definitive guide for work on this critical subject." - Harold H. Saunders, former assistant Secretary of State, current president, International Institute for Sustained Dialogue

"Just Peace is a sophisticated and comprehensive treatment of the moral and political aspects of how wars should end. It builds on just war theory but goes substantially beyond it as well, pulling together a wide range of issues. It is a major contribution to the neglected area of jus post bellum." - Roy Licklider, professor of Political Science, Rutgers University

"To the classic framework of just war, Mona Fixdal adds a framework, a vocabulary, and a process for thinking about just peace. She handles an issue that is full of heated claims of right and wrong with carefully marshalled evidence, a wide knowledge of the relevant theory and philosophy, crystalline logic, and sensitivity to the brutal realities of war and the often-difficult realities of peace. This is a hugely valuable contribution to a profoundly important discussion." - Dan Smith, secretary general, International Alert

"In an area of study which is growing rapidly in terms of both significance and depth this book is a landmark contribution, not merely advancing the debates but helping to frame their terms and directions. Just Peace is an invaluable resource for anyone interested in jus post bellum." - Mark Evans, reader in Politics, Swansea University, United Kingdom

"This elegant book takes issue with simplistic applications of just war theory to the problem of how wars shoudl end. Fixdal (Univ. of Oslo, Norway) writes that its three categories - jus ad bellum, jus in bello, and post bellum - are incorrectly assumed to be connected . . . Even though peace and justice are not entirely compatible, she urges negotiators to consider the legitimate claims of aggressors and victims in shaping a postwar order, including a 'better' (i.e., fairer) distribution of rights . . . Struggles over government and governance occur among elites and population groups, with the latter vulnerable to divide-and-rule tactics that privilege one group, often the largest, itself a danger to conflict resolution based on power sharing. This excellent book offers no way to avoid dilemmas of peace and justice but marks the hazards to be negotiated to achieve both.