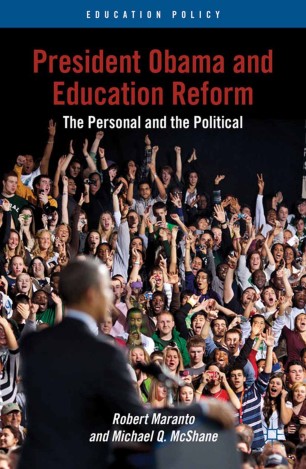 The Personal and the Political

This book offers a comprehensive analysis of President Obama's education agenda. Obama's reforms have drawn skepticism from supporters of traditional public schools. Robert Maranto and Michael McShane believe that the Obama-era reforms have led to successful innovation in both the private and public sector.

"No president in modern history has made better use of the leverage that the federal government can bring to education reform than a former community organizer named Barack Obama. In President Obama and Education Reform, Robert Maranto and Michael Q. McShane look at the conditions and tradeoffs that led Obama to unleash unprecedented change in America's public schools." - Joe Williams, executive director of Democrats for Education Reform; author of Cheating Our Kids: How Politics and Greed Ruin Education

"Debates about the Obama education record usually involve volleys of charges and counter-charges, often originating in ideological bias or partisan posturing. It's about time someone examined actual evidence and weighed competing arguments fairly. That's what Maranto and McShane do here. They anchor their discussion of the Obama record in solid scholarship and a keen grasp of history, giving due weight to the complicated politics of education. Best of all, they write with clarity, style, and wry humor. I trust their book will become a staple for students of education policy and political science but it's worthwhile reading for anyone trying to make sense of our national policies on public schooling." - Nelson Smith, founding president and CEO, National Alliance for Public Charter Schools

"Maranto and McShane get the point that most analysts miss: this is a period of immense creativity in education policy and practice, and the Obama Administration is a major force." - Paul T. Hill, Research Professor, Center on Reinventing Public Education, University of Washington

"Maranto and McShane present competing arguments clearly and fairly and use data and social science literature to examine these various views. What they find challenges many of the common beliefs people have about the education system and should make defenders of the status quo uncomfortable . . . Although dealing with complex arguments, the book is clearly written and easy to understand . . . Recommended." - Choice