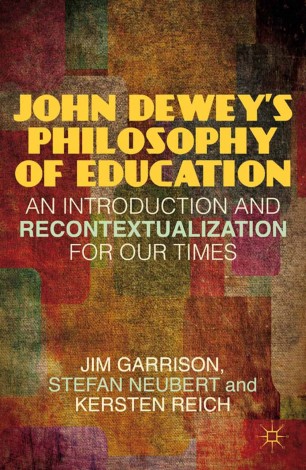 An Introduction and Recontextualization for Our Times

John Dewey is considered not only as one of the founders of pragmatism, but also as an educational classic whose approaches to education and learning still exercise great influence on current discourses and practices internationally. In this book, the authors first provide an introduction to Dewey's educational theories that is founded on a broad and comprehensive reading of his philosophy as a whole. They discuss Dewey's path-breaking contributions by focusing on three important paradigm shifts – namely, the cultural, constructive, and communicative turns in twentieth-century educational thinking. Secondly, the authors recontexualize Dewey for a new generation who has come of age in a very different world than that in which Dewey lived and wrote by connecting his philosophy with six recent and influential discourses (Bauman, Foucault, Bourdieu, Derrida, Levinas, Rorty). These serve as models for other recontexualizations that readers might wish to carry out for themselves.

Stefan Neubert teaches at the Faculty of Human Sciences at the University of Cologne, Germany. He is co-director of the Cologne Dewey Center.

Kersten Reich teaches in the Faculty of Human Sciences at the University of Cologne, Germany.

"Garrison, Neubert and Reich have given their readers a well organized and highly accessible volume that presents John Dewey's key contributions to philosophy and education in a clear and comprehensive fashion. Educators and others will be especially grateful for their extensive discussion of how Dewey's ideas relate to the insights of six of the central figures of post-structuralist thought." - Larry A. Hickman, director of the Center for Dewey Studies and Professor of Philosophy at Southern Illinois University Carbondale, USA

"Most of the educational literature on Dewey suffers either from a neglect of the origins of Dewey's educational theory in his seminal philosophical work in the late 19th and early 20th century on psychology, nature, culture, metaphysics and epistemology or from a presentist prejudice that neglects the necessity of fresh hermeneutical readings of Dewey in tension with contemporary theorists and public problems. In John Dewey's Philosophy of Education: An Introduction and Recontextualization for Our Times, Garrison, Neubert and Reich offer correctives to both problems by introducing the development of Dewey's educational theory through an expert and insightful analysis of his early philosophical writings and bringing Dewey's views into a contemporary gaze by a reconstructive discussion of their transaction with modern philosophers such as Bauman, Foucault, Bourdieu, Derrida, Levinas and Rorty. The result is a work of serious philosophical and educational scholarship that will interest and benefit both students and scholars of philosophy and education." - James M. Giarelli, Professor, Rutgers University Graduate School of Education, USA

"The authors do a great service in modernizing Dewey and especially in showing his relevance to thinking broadly beyond the confines of his own culture . . . Recommended" - Choice
Buy options