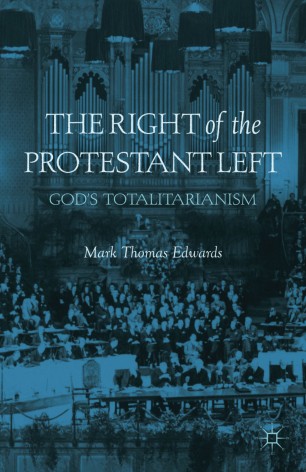 The Right of the Protestant Left

While serving as an introduction to ecumenical liberal Protestantism and the social gospel over the course of the twentieth-century this book also highlights certain totalitarian as well as more fundamental conservative tendencies within those movements.

"Mark Thomas Edwards's fascinating book examines the evolution of the old Protestant Left across the twentieth century as religious liberals worked to build a world church that could keep competing totalitarian regimes in check. The Right of the Protestant Left is a smart and valuable study that brings together work on religion, politics, foreign policy, and globalization. Edwards has made an important and lasting contribution to many fields." - Journal of American History

"Edwards has provided us with a much-needed exploration of not only Realist thought, but also of Realist intent, and through his analysis has encouraged us to reconsider our tendency as scholars to rest easy upon the traditional dichotomies of left/right or liberal/conservative. Furthermore, his interpretation and recovery of the global ambition of the Realist project should give historians pause as we begin to revisit and revise the standard narratives of liberal Protestant establishment and disestablishment." - Religion in American History

"Historians will appreciate the narrative of Christian Realism that is (rightly) not centered on Reinhold Niebuhr. Edwards also makes key contributions to our understanding of the conservative impulses of American Protestantism, as it undergirded a politics that supported economic rights and Third World liberation. But the real contribution of The Right of the Protestant Left is the questions it raises about our narratives of the liberal/conservative divide and about the continuing significance of religion to our understanding of the twentieth century. This book is a welcome addition to our historiography on these subjects and will aid in clarifying key questions." - Society for U.S. Intellectual History

"Mark Thomas Edwards reminds us of something too many historians and critics have forgotten about - the centrality in American life of the old Protestant Left. Readers will find here an important reexamination of a once powerful current of ideas and religious orientation. Edwards has done a fine job of reviving interest in such an important constellation of ideas." - Kevin Mattson, Connor Study Professor of Contemporary History, Ohio University