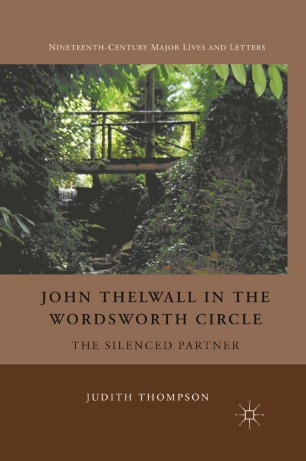 John Thelwall in the Wordsworth Circle

In this book, Judith Thompson restores a powerful but long-suppressed voice to our understanding of British Romanticism. Drawing on newly discovered archives, this book offers the first full-length study of the poetry of John Thelwallas well as his partnership with Samuel Taylor Coleridge and William Wordsworth.

Judith Thompson is Professor of English at Dalhousie University, Canada.

'Painstaking but also passionate, Thompson's textual-biographical study reveals that the famous creative duet of Wordsworth and Coleridge was really a trio. John Thelwall has been resurrected.' - H. J. Jackson, professor of English, University of Toronto

'John Thelwall in the Wordsworth Circle is a tour de force of biographical, rhetorical, and theoretical criticism. It restores John Thelwall as a 'missing link' in our cultural formations of English Romantic literature. Thompson clearly shows how Thelwall is 'there,' even though he has been, until very recently, almost invisible both as a poet in his own right, and as an enabler and catalyst to Wordsworth and Coleridge. Our image of 'the origins of British Romanticism' must be radically indeed! revised by her work on this great Romantic radical.' - Kenneth R. Johnston, Ruth N. Halls Professor, Indiana University

'By inserting Thelwall into the foundational friendship of English Romanticism, Thompson's highly original and intellectually ambitious study reconfigures what we mean by English Romanticism. We come away from Thompson's book with not just a new Thelwall, one with more intellectual depth and breadth, but a new Wordsworth and Coleridge, whose work reflects an ambivalent encounter with Thelwall.' - - Michael Scrivener, Distinguished Professor of English, Wayne State University