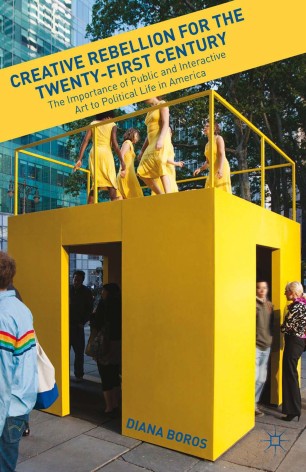 Creative Rebellion for the Twenty-First Century

Employing political philosophy to argue the need for social and public art projects to be a part of the everyday lives of Americans, Boros creates a new synthesis of philosophical ideas to support the political value of public art.

'By speaking to the possibility that art, specifically public art, can inspire the formation of new forms of democratic political participation and community, Diana Boros importantly contributes to the growing body of significant literature on political theory and aesthetics, politics, and art. Her argument helps like-minded theorists to counter-balance the one-sided and by now very questionable thesis that the artistic media of a democratic culture serves only to perpetuate the status-quo.' - Morton Schoolman, professor of Political Science, State University of New York at Albany, author of Reason and Horror: Critical Theory, Democracy, and Aesthetic Individuality "Diana Boros wrote a passionate and thoughtful plea for a new aesthetics of the public spaces in our lives, for endowing our everyday experiences with a thorough and enriching meaning. Erudite and captivating, this book invites the reader to abandon long-held stereotypes and engage in vibrantly new perspectives on art, politics, modernity, revolt, and the assertion of an authentic subjectivity." - Vladimir Tismaneanu, professor of Comparative Politics, University of Maryland

"Creative Rebellion for the Twenty-First Century argues convincingly that contemporary American society is in need of imaginative public art that will inspire a creative, contrapuntal mindset among our citizens. The book offers an authoritative analysis of important political thinkers and cultural critics who have made inroads in that direction. Boros believes in the healing power of transformative public art, and in this compelling and needed work proves herself to be a talented writer who can convey complicated ideas in a lucid manner." - Mary Caputi, professor of Political Theory at California State University, Long Beach