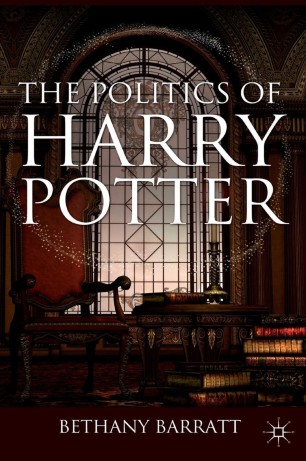 The Politics of Harry Potter

This political analysis of Harry Potter uses the beloved wizarding world to introduce readers to the equally murky and intimidating world of politics. Rowling's work provides us with entries into all of the most important political questions in history, from terrorism and human rights to the classic foundations of political thought.

BETHANY BARRATT is Assistant Professor of Political Science at Roosevelt University in Chicago, USA, and has also been an instructor at the University of California, Davis, and San Quentin State Prison.

"Bethany Barratt's lively, engaging study shows us how the wizarding world incorporates the same political dynamics and histories as our own, and how politics can be used to save as well as destroy. This is a detailed, imaginative exploration of how political authority is established, maintained, and challenged on both sides of the wall that divides Muggle society from Diagon Alley, and how war is waged and power is exercised (both secretly and openly) by those who hold it in both worlds. Barratt's analysis of the Muggle origins and models for the struggles we see in Jo Rowling's series is persuasive and readable; this is full of useful insights into Harry's world, and ours." - Nancy Reagin, professor of History, Pace University, and editor of Harry Potter and History

"You go to the political novel to see your own predicament with fresh eyes. With Bethany Barratt's help, Harry Potter emerges as a crafty introduction to the lore of politics." - Iver B. Neumann, co-editor of Harry Potter and International Relations

"Bethany Barratt counters the common belief that fiction for children and young adults can only be lighthearted yet empty fun. Arguing that readers 'who have grown up with Harry have grown up in a magical world that is no less political than our own,' Barratt makes use of Rowling's complex fantasy realm to explain and elucidate political principles and systems in our own world. This book would be especially appealing to young adults who believe contemporary politics to be exceptionally overwhelming or exceptionally boring; The Politics of Harry Potter speaks directly to today's youth, who are often characterized by their apathy towards affairs of state. Barratt's expertise in international human rights protection and promotion makes her a fitting analyst for this area of study, especially when she uses theories of social movement and collective action to explore the role of resistance and mobilization among disempowered groups in the Potter series and in history." - Giselle Anato, director of Graduate Studies and associate professor of English, University of Kansas