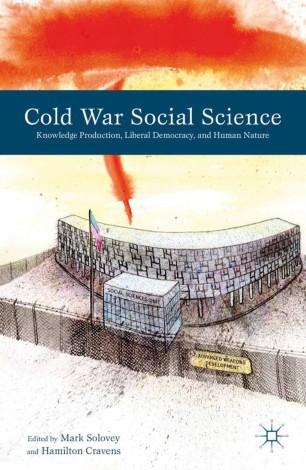 From World War II to the early 1970s, social science research expanded in dramatic and unprecedented fashion in the United States. This volume examines how, why, and with what consequences this rapid and yet contested expansion depended on the entanglement of the social sciences with the Cold War.

MARK SOLOVEY is an assistant professor in the Institute for the History and Philosophy of Science and Technology at the University of Toronto, and for 2011-2012 a Charles Warren Fellow at Harvard University. His research focuses on the political, institutional, and intellectual history of the social sciences in the United States since WWII. He has several articles in scholarly journals, including Annals of Science, History of Political Economy, Journal of the History of the Behavioral Sciences, Radical History Review, and Social Studies of Science. He is the author of the tentatively titled Shaky Foundations: The Politics-Patronage-Social Science Nexus in Cold War America(forthcoming).
HAMILTON CRAVENS is a professor emeritus of history at Iowa State University, writes about science in American culture and the tensions between expertise and democracy. He has authored or edited a dozen books, including The Triumph of Evolution(1978, 1988), Before Head Start(1993, 2003), The Social Sciences Go To Washington(2005), Race and Science: Scientific Challenges to Racism in America(2010), as well as about sixty articles and chapters in books. He is wrapping up a new book, Imagining The Good Society: The Social Sciences in the American Past and Present(forthcoming, 2012).

“The book offers a diversity of topics often missing in the study of cold war social science. … The volume also looks at supporting agencies and early research centers. I recommend this book to students of science, particularly for chapters like those on decision science and creativity.” (Benoît Godin, Technology and Culture, Vol. 56, 2015)

"The advanced student and the interested reader will find the book to be a useful road map to some great work in the history of social science. Its contribution to scholarship is to sharpen our attention to the limits of the Cold War thematic. It counters narratives of national security state oppression and social-science cooption in favour of accounts that situate social science in overlapping institutional environments and traditions, ultiple time frames, and negotations between a multitude of actors. Its sober message is worth listening to." - The British Journal for the History of Science

"Rich and varied . . . these studies together reveal the broad diversity of social science organization and research under Cold War conditions and exigencies: scholars as servants of power; theorists of imperiled democracy and individuality; and innovators in the management of research data, machines, organizations, and polities." - The Journal of American History

"The book sheds light on a number of contexts that are relevant to study the work, commitments, and ambitions of the post-war American social scientists. It is fair to say that as much as the Second World War marked the consecration of a natural scientific and engineering culture, the Cold War era marked the affirmation of a social scientific culture. That this book helps us see more clearly its defining characteristics is already a significant achievement." - Journal of the History of Economic Thought

"In connecting issues of knowledge and power to questions of human nature, the essays in this volume often unknowingly suggest possibilities for moving beyond the facile distinctions between repressive and emancipatory social science that have shaped the critique and defense of social science since the era of the cold war." - U.S. Intellectual History

"The structure of this volume encouraged me as a reader to think acutely about the connections between the social sciences . . . There are too many strong chapters in this book to list." - blogs.lse.ac.uk

"Solovey is certainly right to observe that there has been recently renewed interest in 'Cold War social science' . . . A few essays seem to me to take this enterprise some steps forward." - Cold War History

"In this ambitious volume, leading historians assess the shared moves - intellectual, institutional, political - that characterized the social sciences in Cold War America. Engaging examples range from area studies to linguistics, psychology to economics, each grappling with hard questions about military patronage and the tensions between pure and applied research. Authors reveal important continuities to earlier periods even as they hone in on what was special about the bounded historical moment of the Cold War. A must-read for anyone interested in relations between knowledge and power and the changing place of the academy in American life." - David Kaiser, Germeshausen Professor of the History of Science, Massachusetts Institute of Technology

"This exciting collection proves that the history of Cold War social science has come of age. It is at once a collection of fascinating case studies and a volume that probes the big questions about science and politics. To what extent did Cold War imperatives shape knowledge about social relations, cultural difference, individuality, human nature, motivation, and behavior? How was the stunning mid-century expansion of American social science also rooted in institutional developments that predated and outlasted the Cold War? Above all, what were - and are - the consequences for democracy?" - Ellen Herman, professor, Department of History, University of Oregon