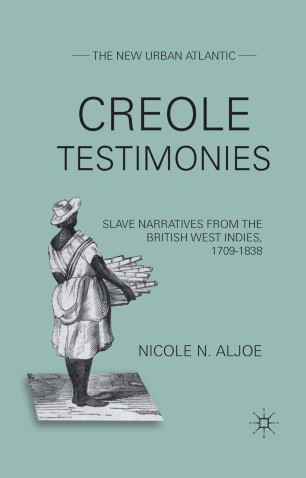 Analyses the relationships among the socio-historical contexts, generic forms, and rhetorical strategies of British West Indian slave narratives. Grounded by the syncretic theories of creolisation and testimonio  it breaks new ground by reading these dictated and fragmentary narratives on their own terms as examples of 'creole testimony'.

'Creole Testimonies will become the standard work on West Indian slave narratives and ex-slave narratives. Aljoe accurately points out that scholars and readers have long preferred the North American ex-slave narratives, such as Frederick Douglass's, because through them shines a single seemingly authentic author . . . Creole Testimonies argues for the centrality of these narratives based on their collaborative nature, in which several voices, including the slave's or freed-person's, argued about black humanity and the legitimacy of slavery and based on their reflection of West Indian culture and even Caribbean topography - fragments assembled by men and women into a meaningful whole.' - John Saillant, professor of English and History, Western Michigan University