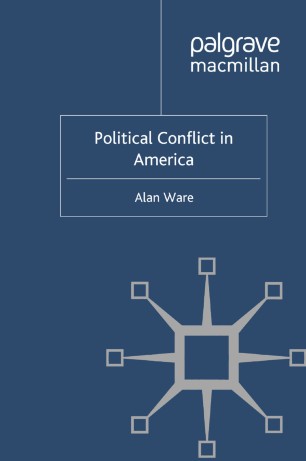 Recently, there has been a high level of conflict in American politics. Massive disagreements over government policies have pitted one group of Americans against another. This book explores how and why this style of politics developed and argues that fundamental disagreements between Americans have always been at the root of its politics.

ALAN WARE Professor of Politics at Oxford University, UK, and a fellow at Worcester College.

'Alan Ware presents a valuable and thought-provoking big picture interpretation of the long-term nature of political conflict in American politics. Few scholars could undertake this, but he pulls it off admirably. He is concerned with the historical sources and intensity of conflicts - the roles of region, class, religion, and ideology over time. He addresses how those conflicts are represented and perpetuated by parties and politicians as they work within decentralized American institutional arrangements. He presents a convincing answer to the question of why elections in America rarely settle anything, but only provide the context for the next round of conflict. This analysis asks important and broad questions and provides comparative commentary. It is well-written interpretative political science at its best and provides many arguments for further research. For those interested in the fundamentals of conflict in American politics, I highly recommend it.' - Jeff Stonecash, Maxwell School, Syracuse University

'In Political Conflict in America, Alan Ware goes in search, not of the minutiae all too common to the study of American politics, but of a small set of lasting influences that have created its diagnostic hallmark: multiple policy disputes that are ongoing, rancorous, and never truly settled. In Ware's hands, social divisions, ideological divisions, institutional divisions, and partisan divisions come together, almost from the beginning, to shape American politics into our time.' - Byron E. Shafer, Hawkins Chair of Political Science, University of Wisconsin

'A well-informed, intelligent, and intriguing attempt to make sense of American politics tout court. Ware's intellectual style combines a quest to answer the Big Questions with attention to detail that is often neglected by others on that quest. Every chapter brings with it intriguing comments and revealing insights reflecting Ware's intelligence, lifetime of research on American politics, and willingness to transcend disciplinary boundaries. Everyone seriously interested in the United States at home or abroad should read this book!' - Graham K. Wilson, professor and chair, Department of Political Science, Boston University

'Here is a fresh and engaging look at the US political system. Ware argues that the system has been unusually stable but it has also brought an uncommon level of harsh and enduring internal conflict. It is a strange combination. Ware shows an encyclopedic grip and a sure touch in addressing the relevant politics and history.' - David R. Mayhew, Sterling Professor of Political Science, Yale University

'One of the world's most distinguished analysts of American political parties, Alan Ware has written an expansive and compelling essay in which he explores why political agreement is so hard to achieve and sustain in America. His elegant answer, that social and ideological division have combined with the distinctive nature of political competition in America to reinforce the consequences of the separated and federal constitutional rules laid down in 1789, commands attention and engagement. Here is an exceptionally stimulating book which unsettles conventional wisdom even as it gives great pleasure in the reading.' - Nigel Bowles, director of the Rothermere American Institute, University of Oxford