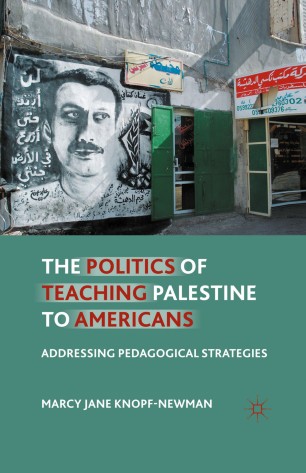 The Politics of Teaching Palestine to Americans

Explores how American youth are indoctrinated with Zionist mythology and how to intervene in that process by teaching about Palestine. It argues that as the relationship between Zionist education and the Israel lobby continues to be strong, it is necessary to correct the misrepresentations that infiltrate Western culture.

"The Politics of Teaching Palestine to Americans is a must for those committed to a decolonizing pedagogy and curriculum grounded in social justice. This incisive first-person account - based on careful research and rigorous analysis - provides a critical genealogy of Zionist education within American schools, where Knopf-Newman exposes how language and history have obscured the reality of Palestinians, which has been suppressed in the United States. This brilliant and important work is instructive in every sense of the word." - J. K?haulani Kauanui, Associate Professor of American Studies and Anthropology, Wesleyan University, USA

"Marcy Jane Knopf-Newman has written an important, indeed, a necessary book. Smart, well-informed, and well-positioned, she contributes a unique and critical perspective to one of the most complex, vexing, and crucial issues of our time. She provides a powerful corrective to a dishonest narrative inside the United States that dominates the discourse concerning Palestine/Israel today. Disrupting the controlling metaphor concerning all things Middle East is a key step in opening the imaginative political space where alternatives to the status quo can be noticed or invented. Newman's book has the potential to do just that, and then to change the way we think and act in significant ways." - Bill Ayers, author of Fugitive Days, Teaching Toward Freedom, and To Teach

"For decades, the question of Palestine has been the third rail in American academia and public discourse. Where there ought to be vital discussion, there has too often been silence, fear and intimidation of those who question official Israeli history, or unconditional US support for Israel. Knopf-Newman's essential book tackles this issue head on, breaking taboos and providing educators and general readers with real tools to understand the history of Palestine and how we talk about it." - Ali Abunimah, Co-Founder of The Electronic Intifada and author of One Country: A Bold Proposal to End the Israeli-Palestinian Impasse

"The Politics of Teaching Palestine in America puts us on the right path toward producing . . . a people's history, providing readers with a rich resource for teaching future generations of students about how to intellectually resist erasing the dispossession, exile, and loss associated with 1948 Palestine." - Journal of Palestine Studies

'Given the bruising controversies that crop up whenever teaching about Palestine is an option, Marcy Jane Knopf-Newman's new book, The Politics of Teaching Palestine to Americans, strides into this minefield with determination and well-earned confidence. Here is a passionate and committed argument that accomplishes two important goals and, while at it, a few secondary ones as well. Most importantly, this book makes a strong case for taking on this topic in the first place, and it discusses an array of written and other media that can be used in developing new curricula for a range of learners, from high school through college and beyond.' Radical Teacher