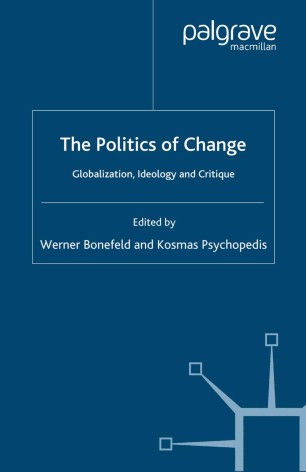 The Politics of Change

This work takes a critical view of the debate on globalization and assesses revamped versions of structuralist thought, which underpin much of the globalization discourse. In contrast to conventional views of change, the book emphasizes change as a politics of emancipation.

WERNER BONEFELD is Lecturer in the Department of Politics at the University of York. He is co-editor of Post-Fordism and Social Form, Open Marxism (three volumes, co-editor), Global Capital, National State and the Politics of Money, A Major Crisis and The Recomposition of the British State during the 1980s.

KOSMAS PSYCHOPEDIS is Professor in the Department of Economics at the University of Athens. His previous works include Open Marxism (three volumes, co-editor), Max Weber and the Construction of Concepts in the Social Sciences (in Greek) and The Philosopher, the Politician and the Tyrant (in Greek).