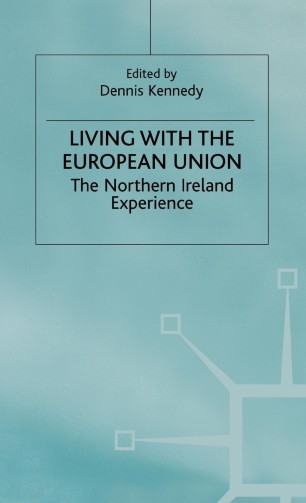 Living with the European Union

The experience of one region over 25 years within the European Union forms the basis of an examination of how the EU impacts on a region's economy, on its society and on its particular problems. In the case of Northern Ireland, inclusion in the European Union has coincided with the most sustained campaign of political terrorism in western Europe.

DENNIS KENNEDY has been a close observer of the European scene from an Irish viewpoint for the past 30 years. First, as a journalist (Diplomatic Correspondent of the Irish Times), he covered the entry negotiations that brought the United Kingdom and Ireland into the then European Economic Community. From 1985 to 1991 he served as Head of the European Commission's Office in Belfast. Since 1993 he has been attached to the Institute of European Studies at Queen's University, Belfast. His journalistic career includes periods in the United States (1963-64) and Ethiopia (1966-68) and he has reported widely on Third World matters and development cooperation.