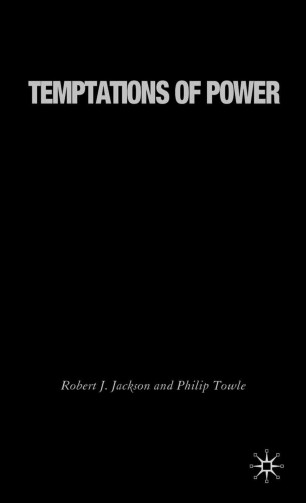 The United States in Global Politics after 9/11

Temptations of Power examines the new security dilemma which confronted George W. Bush when terrorists proved on 9/11 that they could seriously wound a great military powers on home ground. The authors argue that the response was influenced by neo-conservative exaggeration of the efficacy of military power and belief in the US ability.

ROBERT J. JACKSON is Fletcher Jones Professor of Government and Director of International Relations at the University of Redlands, California, USA. He is also Distinguished Professor of Political Science at Carleton University Ottawa and Life member of Clare Hall, University of Cambridge. His former experience includes employment in various high government positions, including Senior Policy Advisor to the Canadian Prime Minister. Since obtaining his DPhil from Oxford, he has published over 30 books in Comparative Politics and International Relations. Among the most recent are Politics in Canada, North American Politics and Europe in Transition.

PHILIP TOWLE is Reader in International Relations at the Centre of International Studies at Cambridge University, UK, where he has taught for the last 25 years. He was previously employed by The Foreign and Commonwealth Office, The Australian National University in Canberra and the Royal Naval College, Dartmouth. His most recent books are Enforced Disarmament from the Napoleonic Campagin to the Gulf Warand Democracy and Peacemaking.

'Jackson and Towle have written the best indictment of American foreign policy under the leadership of George W. Bush yet published...[They] have given us a snap shot of the deterioration of international relations. They have written a must-read - and have possibly told more than thy intended.' - Carl Cavanagh Hodge, International Journal

'...an empowering and engrossing book that encourages the reader to reflect on the world populus following events post 9/11...Jackson and Towle have provided a book that will be useful both as a text and reference, not only for academics and students of international relations, international policy and governance, but as a very readable book for the generalist interested in developing and forming an informed and honest opinion of the Bush administration and American international politics since the end of the Cold War.' - Victoria Redfern Australian Journal of Public Administration

The book's importance lies in its attempt to address the most controversial and important aspect of contempaory politics in a serious, multilateral and deeply political way... Jackson and Towle have written a brave book'