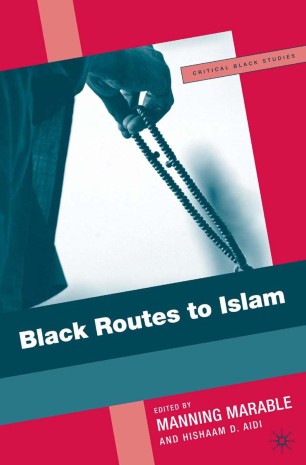 Starting with 19th century narratives of African American travelers to the Holy Land, the following chapters probe Islam's role in urban social movements, music and popular culture, relations between African Americans and Muslim immigrants, and the racial politics of American Islam with the ongoing war in Iraq.

Hishaam D. Aidi is a lecturer at the School of International and Public Affairs, Columbia University.

"Erudite yet easy to read, these timely and stimulating essays cover a wide variety of fascinating topics. They revealingly map the unique and intriguing landscape of Islam among contemporary African-Americans. Along the pages, with the help of music, history, linguistics, sociology and several other disciplines, their community, one of the least understood in the country, comes to life in all its striking complexity and diversity." - Sylviane A. Diouf, author of Servants of Allah: African Muslims Enslaved in the Americas

"This impressive and sweeping collection of essays examines the hidden history of the 'Muslim presence' in North America that began with the enslavement of significant numbers of Muslim Africans. It shows how the development of US racial categories and hierarchies has long been suffused with assumptions about the Muslim world. And, it powerfully suggests the historical centrality of Islamic discourse and practice to the sense of common oppression and linked fate central to the emergence of modern black freedom struggles." - Nikhil Pal Singh, Associate Professor of Social and Cultural Analysis and History, New York University

"This exceedingly well-written and thoughtful collection of articles and essays simultaneously illuminates as it transforms such critically important fields as Black Studies and Islamic Studies. The bold themes of this book are as expansive as the breadth of its geography, ranging as it does from Harlem, Black Chicago and Watts to Egypt, Saudi Arabia and Iran. Still, the ultimate value of this quite insightful book may be the bright light it shines on how the U.S. - and, indeed, the entire international community - grapples with what may be the most important issue of this century: how to engage Islam and the Muslim world." - Gerald Horne, author of' The End of Empires: African-Americans and India

"This collection brings together some of the best and most innovative scholars in the country, writing essays that are engaged, intellectually rigorous, and a pleasure to read. Black Routes to Islam is really about the broad canvas of American relationships to the Middle East - with religion, race, and politics at the heart of the story. It tells a transnational history we need to know, and then brings that history into our current moment, showing how 'war on terror' has come to American Muslim communities. This is a wonderful, timely, politically powerful book." - Melani McAlister is an Associate Professor of American Studies and International Affairs at George Washington University