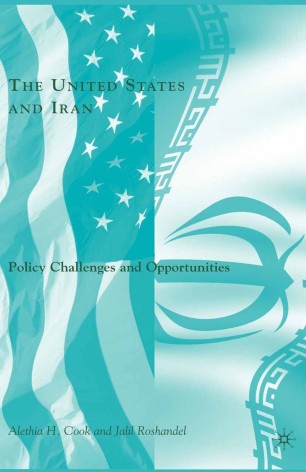 The United States and Iran

Relations between Iran and the US have been strained for over 30 years. This book provides unbiased discussions of issues such as historical relations, the Iranian nuclear program and their support for 'terrorist' organizations. It also identifies a wide range of possible US policy solutions to improve relations.

ALETHIA H. COOK is an Assistant Professor of Political Science and the Assistant Director of the Security Studies Program at East Carolina University, USA.

"Iran-US relations are again at the center of international affairs. . . Navigating this polemical dispute, Cook and Roshandel. . . succeed in providing a basic primer, and unbiased account of both sides concerns, and a set of policy proposals for the US. Their modest book will be useful in the study of Iranian-US relations, as it quickly brings novices up to speed on the issues as of early 2009. . . Another value of the book is its evenhandedness in explaining the views of both sides. Summary: Highly recommended." - CHOICE

"Many discussions of U.S. policy towards Iran have very little to say about Iranian politics and neglect the critical question of how the Iranian government and people view their long and difficult relations with the United States. Cook and Roshandel have made a valuable contribution by bringing the Iranian point of view into the conversation. Whether you agree or not with their policy ideas, their effort to help us see the world through Iranian eyes is something that all of us can value." - Tim McKeown, Professor of Political Science, The University of North Carolina at Chapel Hill

"This compact book provides a clear survey of the outstanding issues between the United States and Iran and lays out a set of policy choices and recommendations for consideration by the new administration in Washington. For anyone interested in the subject of U.S.-Iran relations, this is a good place to begin." - Gary G. Sick, Senior Research Scholar and Adjunct Professor of International Affairs, Columbia University, and former security advisor to President Carter