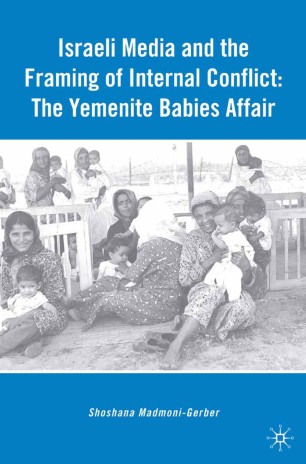 Israeli Media and the Framing of Internal Conflict

A study of the media coverage of the Yemenite Babies Affair - the story of the alleged kidnapping of hundreds of Yemenite babies from their families upon arrival to Israel in the early 1950s. Examining the role played by the media and by racism, this book is part of a growing trend to expand perspectives within Israeli scholarship.

Shoshana Madmoni-Gerber is Associate Professor in the Department of Communication and Journalism at Suffolk University, USA.

"In treating this subject, Madoni-Gerber provides an intriguing case study for what has befallen other isolated minorities worldwide when thrust into modern societies. Summing Up: Recommended. Upper-division undergraduates through faculty." - CHOICE

"As a feminist legal realist theorist, I find [Israeli Media and the Framing of Internal Conflict] to be a pioneering document both academically and symbolically. It challenges three main interrelated and established themes, which I consider to be central in the process of post-colonialist writing: the academic importance of the substance researched and the methodologies deployed, the symbolic significance of who is writing, and the notion of resistance." - Claris Harbon, Holy Land Studies

"This brilliantly written and meticulously researched book explores one of the darkest chapters of those oppressive relations . . . This book belongs on your bookshelf in the small but ever-growing library of Mizrahi (Middle Eastern Jewish) independent and alternative writing on the history of the Jews in modern times" - Sami Shalom Chetrit, Israeli poet and scholar, Queens College, CUNY, USA

"Madmoni-Gerber tells a shocking story nobody wants to hear . . . Simultaneously critical and compassionate, Madmoni-Gerberexplores the painful border between the personal and the political, betweenIsrael's nationalstory and her family's immigrant experience." - James E. Young, Professor and Chair, Department of Judaic and Near Eastern Studies, University of Massachusetts Amherst, USA

"Madmoni-Gerber's lucid book on the Kidnapped Yemeni Babies' Affair is the fruit of scrupulous long-term research and eloquent writing. It is the first full scale book in English on the subject that transgresses the Hebrew-language translation blockade on the Affair. Her analysis of the state of Israel's kidnapping and selling for adoption Yemeni-Jewish babies serve as a major case study to illustrate the intra-Jewish racism characterizing state ideologies, policies, and practices as well as daily life in the state that has declared itself to be homeland for all Jews. Through interviews and archival research, Madmoni-Gerber illuminates the bureaucratic and legal red tapes the state has wrapped around the Jews from the Muslim World and the Middle East who tried to resist this racism by demanding their inalienable rights to parent their children and around the activists who sought to unearth the state's role in the affair. Israelis loyally call their printed and electronic media 'the tribal fire,' and often ignore its embeddeddness in the regime. Contextualizing the tools of critical cultural studies Madmoni-Gerber examines the modes in which this media acted in tandem with the regime to conceal and contain the Affair fearing that unearthing its truth would lead to the undoing of the State as a Jewish refuge where all Jews are to be equal. In so doing, Madmoni-Gerber provides the first ever study of Israel's media through the optics of the venerable Subaltern Studies school. This book is a must read for those wishing to gain a deeper understanding of the racial formations of the Palestine/Israel conflict and its inextricable links to Israel's internal racism against non-European Jews of darker hues." - Smadar Lavie, author of The Poetics of Military Occupation and co-editor of Displacement, Diaspora, and Geographies of Identity