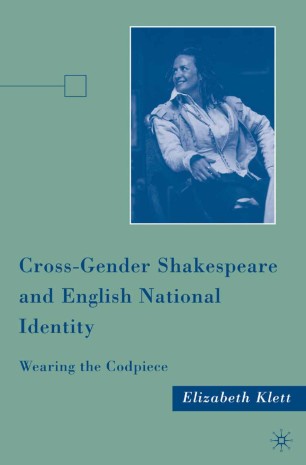 This book examines contemporary female portrayals of male Shakespearean roles and shows how these performances invite audiences to think differently about Shakespeare, the English nation, and themselves.

ELIZABETH KLETT is Assistant Professor of Literature at the University of Houston-Clear Lake, USA.

"Klett offers an accessible and engaging assessment of female-to-male cross-gender casting practices and English national identity in several contemporary performances of Shakespeare. Her discussion is admirable in its clarity and detailed attention to a range of performances and the discourses in which they participate. This book is a valuable resource for students interested in cross-gender casting practices and Shakespeare." - Catherine Silverstone, Lecturer in Drama, Theatre and Performance Studies, Queen Mary University of London

"While much has been written about a resurgence of all-male productions of Shakespeare in the past two decades, scant attention has been paid to a parallel phenomenon, the casting of women in roles written for men and boys. In this volume Klett redresses that imbalance quite brilliantly. Surveying a number of important British productions during a crucial decade, from Deborah Warner's Richard II in 1995-96 to all-female stagings at the Globe in 2003-04, she explores the aesthetic and cultural work done by such cross-gendering of roles: how it disrupts conventional assumptions about theatrical mimesis and the performing body, interrogates the construction of dramatic character, and threatens belief in Shakespearean 'universality' and the sense of English national identity to which such belief has traditionally contributed. Klett's argument is thus both ideologically inflected and alert to the history of Shakespearean performance. She writes with precision, cogency, and a lively sense of theatrical practice; and the distinctions she draws among various cross-gendered productions are often as revealing as their similarities. This is performance criticism of the highest order." - James C. Bulman, Professor of English, Allegeny College and general editor of the series Shakespeare in Performance

"The title of Klett's compelling new book - wearing the codpiece - refers both to female actors signaling their on-stage identities as male characters by donning a significant piece of male clothing, and to women theatre artists assuming authority in a creative process traditionally reserved for men. In dealing with both of these aspects of the actor's art and craft, Klett authoritatively shows not only what meanings are generated by theatrical cross-dressing, but how meaning is generated in the staging of Shakespeare's plays. As such, this book will inform and inspire both scholars of Shakespeare in performance and theatre practitioners hoping to create stagings of their own." - Cary M. Mazer, Theatre Arts and English, University of Pennsylvania