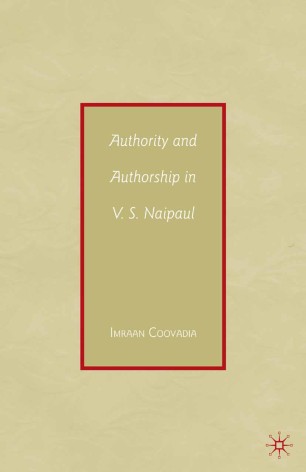 This book traces the ways in which problems of imaginative authority and authorship structure the fiction and non-fiction of V.S. Naipaul and resonate in postcolonial literature. Imraan Coovadia argues that the post-colonial societies Naipaul studies in novels such asA Bend in the RiverandGuerillasare defined by the fragility of their authority. Coovadia demonstrates through close reading, how Naipaul, born in Trinidad to an Indian family and resident of the United Kingdom,asserts hisimaginative authority over many different situations across the globe through a complex literary rhetoric.

IMRAAN COOVADIA is Senior Lecturer in the Department of English at the University of Cape Town, South Africa.

"In this sharp and subtle book, Coovadia demonstrates that V.S. Naipaul s authority as an interpreter of non-Western societies is built on a set of literary devices, such as the cold joke, that pre-empt humanitarian fellow-feeling and help the reader laugh along with Naipaul at post-colonial suffering. In a series of brilliant close readings of his books on the Caribbean, sub-Saharan Africa, India, and the Muslim world, Coovadia helps us understand one of the great rhetorical achievements of contemporary literature: Naipaul s success in making his anti-liberal prejudices seem not just plausible, but prescient in a cold-eyed way." - Mukul Kesavan, Jamia Millia Islamia University, Delhi and author of Looking Through Glass

"What s so satisfying about this study is its clear and precise identification of Naipaul s mechanisms of pillory. This is a long-awaited reading of the classical allusions and gamesmanship that cuts to the heart of Naipaul s own canonically traditionalist, colonial erudition - the intertextuality of his allusive depth, and the elitist stronghold from which he is able to, albeit correctly, trip the less erudite, among both his characters and his readers. Coovadia s application of the phenomenon of the cold joke is brilliantly apposite in illuminating the joke knowledge that underwrites the writerly Naipaul and his entanglement in the discourse of race. " - Fawzia Mustafa, Fordham University