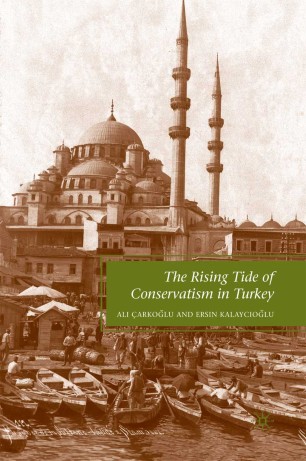 The Rising Tide of Conservatism in Turkey

This book analyzes the development and impact of conservatism on Turkish politics in the post-Cold War era. Exploring the impact of international system change on Turkey over the course of recent events, this book covers the emerging tension and stress in Turkey's political culture, economy, and democratic institutions.

"The Rising Tide of Conservatism in Turkey by Professors Ali Çarkoglu and Ersin Kalaycioglu is a very important contribution to the quantitative based literature on modern Turkish politics. The results presented in this book are based on a number of professionally conducted surveys that illuminate the fundamental changes of political and social attitudes in the Turkish electorate. I consider this book to be a superb example of the way data, history and statistical analysis can present a scientifically based insight into the political evolution of a dynamical country whose geopolitical location is going to become more and more important in the politics of the countries north and east of the Black Sea and the Islamic countries of the Middle East." - Melvin Hinich, Departments of Government, Economics, and Applied Research Laboratories, The University of Texas at Austin

"This book is one of the most compelling accounts of contemporary developments in Turkish societal value structures that have profound implications for the country s future. Through survey research and meticulous analysis, Ali Çarkoglu and Ersin Kalaycioglu demonstrate the apparent rise of conservatism among Turkey s citizens over time that cover such important issues as; religiosity, tolerance, attitudes towards women, ideological shifts, and xenophobia. Their study provides a valuable comparison to earlier periods of the Republic and project into the future through a provocative discussion of implications of this rising conservatism for the country s domestic milieu and foreign affairs. It is a solid study that is a must read for followers of Turkish politics and comparative politics." - Birol A. Yesilada, Professor of Political Science & Contemporary Turkish Studies Endowed Chair, Portland State University