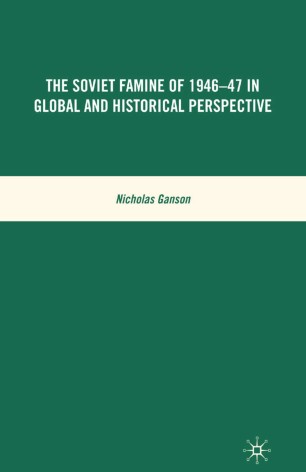 The Soviet Famine of 1946–47 in Global and Historical Perspective

This book illuminates a little-known but tremendously significant twentieth-century crisis in the Soviet Union. Drawing on archival materials declassified since the fall of communism, Nicholas Ganson situates the famine of 1946-47 at the crossroads of Soviet social and political history, World War II, the Cold War, ideology, and famine in the modern world. He sheds light on the perspectives of Soviet elites and gives voice to the famine s victims. In revealing the multi-causality of the postwar hunger, this ambitious work challenges the received wisdom about the relationship between politics and famine.

NICHOLAS GANSON is a Visiting Adjunct Professor of History at Virginia Tech, USA.

"The story of the 1946-47 Soviet famine has largely been ignored by historians and economists and this is the first major account of the event in English by a Western scholar. Nicholas Ganson has meticulously pieced together archival evidence as well as previously published material to describe and analyze the causes and consequences of the famine. A generally illuminating account of a significant aspect of the Soviet experience after World War II." - The Russian Review

"Ganson has filled a glaring void in our understanding of the postwar Soviet famine and, in the process, of various aspects of late Stalinist policies and society. But the book is more than a treatment of the famine. Ganson has provided readers with insights into various related issues that set the broad stage for the famine, ranging from the consequences of wartime destruction of the USSR, to climatic factors, to economic policies and policy choices (Hobsonian choices), to popular behavior . . .Given that the English-language literature on this famine is meager, it will become the standard work." - William J. Chase, Professor, Department of History, University of Pittsburgh