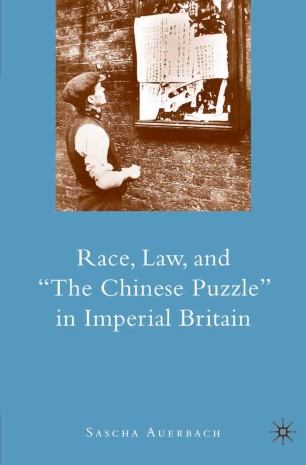 Race, Law, and “The Chinese Puzzle” in Imperial Britain

In the early twentieth century, Chinese immigration became the focal point for racial panic in Britain. Fears about its moral and economic impact - amplified by press sensationalism and lurid fictional portrayals of London's original 'Chinatown' as a den of vice and iniquity - prompted mass arrests, deportations, and mob violence. Even after the neighborhood was demolished and its inhabitants dispersed, the stereotype of the Chinese criminal mastermind and other 'yellow peril' images remained as permanent aspects of British culture. This painstakingly researched study traces the historical evolution of Chinese communities in Britain during this period, revealing their significance in the development of race as a category in British culture, law, and politics.

"Auerbach engages directly with the question that underpins much of the historiography in this area: was fear of economic competition or racism the ultimate cause of anti-Chinese attitudes? The book presents persuasive evidence and turns significant new light onto the same question within the empire. Too seldom has comparative engagement with this obviously transnational issue been undertaken, and Auerbach s study is the more to be commended because of this." - American Historical Review

"Sascha Auerbach's Race, Law, and "the Chinese Puzzle" in Imperial Britain is a significant contribution to the scholarly literature on Anglo-American representations of China and the Chinese and on the historical experiences of the Chinese Diaspora. What makes this particular book stand out from many others is its success in delineating the symbiotic relationship between representations and praxis - in other words, the manner in which derogatory and racist media representations of Chinese people living in Britain in the the late nineteenth and early twentieth centuries influenced the treatment of Chinese people in the judicial system, and how the reports of these legal judgments then in turn reinforced the ways in which the Chinese in Britain were dipicted in media and literature, creating a vicious cycle of negative representation." - David Lloyd Smith, H-Net Reviews

"This is a nuanced exploration of a distinct 'moment' in British culture, politics and racial relations . . . Scholars of Britishness/Englishness, as well as cultural and imperial historians more broadly, will find much to engage in this excellent and important book." - Twentieth Century British History

"This book is a welcome addition to the growing literature of the ethnic Chinese in Britain, because it gives substance, social and political context and depth of vision to some of the racist themes that today are only vaguely known as a handful of jaded slogans, names and topics of another age. Auerbach must be commended for his systematic exploration of a huge collection of scattered sources, the basic integrity and thoroughness of his account, and his subtle analysis of racism as a cultural phenomenon. This enables the reader to be drawn into a sound and reflecting engagement with the issues. Sascha Auerbach delivers the raw materials on which we will be able to build our analyses of how racist discourse works. In that sense, it is a timely and highly accomplished contribution to the literature about both anti-Chinese racism and to race relations in the colonial period." - Reviews in History

"Auerbach offers the first comprehensive narrative of Chinese communities in modern Britain, focusing on the tangle ofrace and labor and empire that gave shape to their discursive and material histories. In so doing, he nuances recent work on English national-imperial identity, pointing us to the law and public policy, to docks and alleyways, to the ship and the jury box, to the Transvaal and the U.S. and Australia and beyond. The debate over Chinese labor is a fruitful angle of vision, enabling us to appreciate the complexities of modern imperial cultures in new and productive ways." - Antoinette Burton, Professor and Chair, Department of History and Catherine C. and Bruce A. Bastian Professor of Global and Transnational Studies, University of Illinois

"London's Chinese communities in the early twentieth century may have been small, but as Auerbach convincingly shows, they catalyzed a degree of anxiety disproportionate to their numbers. Neatly demonstrating the relations between fears of inter-racial sex, labour dilution and drug addiction, Auerbach opens a window onto the lives of Chinese immigrants in London. This is a lively and compelling exploration of anti-Chinese sentiment in Britain and its empire, and skillfully underscores the critical links between empire, race and gender." - Philippa Levine, author of The British Empire, Sunrise to Sunset (2007) and Prostitution, Race and Politics: Policing Venereal Disease in the British Empire (2003)