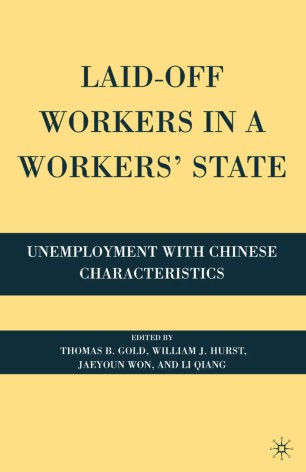 Laid-Off Workers in a Workers’ State

In this book, an international team of scholars explores not only the politics of xiagang, but also the effect on Chinese workers and their families, and the variety of their responses to this unprecedented dislocation in their lives.

"The chapters in this book collectively address a critical juncture in the history of Chinese labor: the mass unemployment that followed the restructuring of state enterprises in the 1990s. Readers will find rich descriptions of the identities and worldviews of those who were once the socialist "masters" of the Chinese factory, as well as careful explanations of the political demands and policy responses that came with their sudden loss of material and social status." - Mark W. Frazier, ConocoPhillips Professor of Chinese Politics, University of Oklahoma

"Fourteen China experts examine the fate of the thirty million state workers who have been laid off, in the most comprehensive study to date. The relationships between the state and laid-off workers and within the working class turn out to be much more complex and interesting than imagined by conventional wisdom." - Anita Chan, Australian National University; Author of China s Workers Under Assault: The Exploitation of Labor in a Globalizing Economy

"The first edited volume in English on this subject, Laid-Off Workers fills several gaps in the existing xiagang research. . . . This book represents an insightful, current, comprehensive, and well-documented study of the laid-off workers in the aftermath of unprecedented enterprise restructuring and privatization in China's economic reforms. It is a valuable addition to the existing literature on social conditions among Chinese working people." - The Journal of Asian Studies