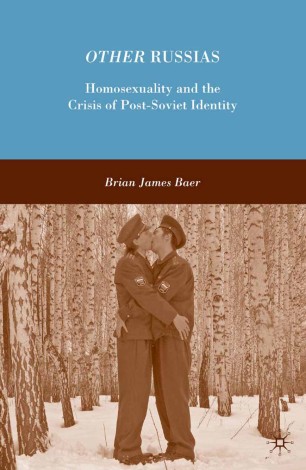 Homosexuality and the Crisis of Post-Soviet Identity

This book examines the unprecedented explosion of homosexual discourse in post-Soviet Russia and details how homosexuality has come to signify a surprising and often contradictory array of uniquely post-Soviet concerns.

Baer s immensely readable volume adds greatly to the scholarship on post-Soviet culture as well as gender and sexuality studies; his original and incisive analysis uncovers the ways in which discussions about (Russian) homosexuality signify the Russian populace s eclectic attempts to construct a post-Soviet identity and aesthetic. - The Russian Review " Other Russias is a fascinating study of the significance of homosexuality in post-Soviet Russian culture . . .In this first major study of homosexuality in Russian culture, Baer deftly negotiates the complexity of cross-cultural studies of homosexuality, avoiding the pitfalls of projections onto an Orientalized other and allowing Russian cultural motifs to speak on their own terms and in their own language." - Kevin Moss, Professor of Russian, Middlebury College and editor of Out of the Blue: Russia s Hidden Gay Literature ."With restless curiosity, Baer entertains as he tells us what homosexuality means in contemporary Russian culture. Other Russias explores not only what a globalizing Western eye has made of queerness in Moscow (and beyond), but what Russians themselves have made of the sexual other in their midst. Baer s intelligent readings of post-Soviet high- and low-brow literature and films show how homosexuality has become an essential element in fictions of national collapse, a talisman of gender identities and literary conventions in flux. Baer s chapter on the comeback - after 74 years in the Soviet close - of Russia s spiritual homosexual restores a long-lost cultural type to the map of European culture. This book will be essential reading for all queer studies enthusiasts." - Dan Healey, Swansea University and author of Homosexual Desire in Revolutionary Russia "Through a close reading of post-Soviet literature and film, Baer illuminates the complexities of changing assumptions about homosexuality in contemporary Russia. A fascinating illustration of the ways in which historical and cultural specificities create new ways of understanding sexuality, and a warning against too easy assumptions about sexual freedoms in twenty first century Russia." - Dennis Altman, Professor and Convenor of Politics, La Trobe University and author of Global Sex and Homosexual "Baer has written a groundbreaking study of the discourse surrounding homosexuality as a reflection of Russian post-Soviet identity from the late 1980s through the Putin presidency. Effectively deploying historical and geographical frameworks, the author juxtaposes inherently Russian associations to the notion of homosexuality as a Western import that threatens Russian male identity. Essential" - CHOICE