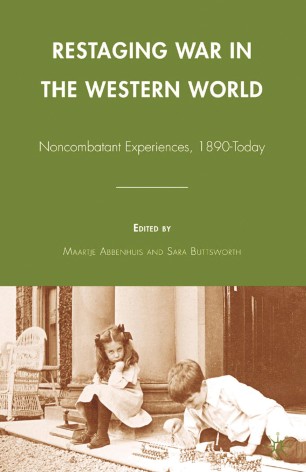 Restaging War in the Western World

This collection seeks to move noncombatant perspectives to center stage, acknowledging their importance, destabilizing the primacy of the combatant, and explaining or undermining the staging of warfare as a singular and acontextual production.

"There is a rapidly expanding literature on the cultural history of civilians in modern warfare. But Abbenhuis and Buttsworth bring new subjects to the table, both methodologically and geographically." - Leonard V. Smith, Frederick B. Artz Professor of History, Oberlin College

"[Abbenhuis and Buttsworth] have collected essays that emphasize the nexus of both antiwar and anti-military thought with feminist perspectives, stressing ways in which women have contributed to modern pacifism or have been deprived of recognition for their contributions to the culture of war. Especially engaging are the essays detailing the efforts of women social democrats in WWII Sweden to work for peace and still contribute to civil defense, and the plight of war brides coming to New Zealand and the mixed perceptions with which they were received." - CHOICE