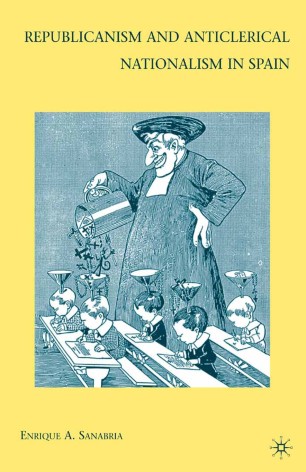 Republicanism and Anticlerical Nationalism in Spain

This book analyzes attempts by radical Spanish republicans to construct an anticlerical-nationalist vision of Spain, focusing in particular on the the mass production by the 'anticlertical industry' of newspapers, novels, poems, cartoons, posters, postcards and plays put out by republican muckrakers, journalists, and politicians.


ENRIQUE SANABRIA is an Assistant Professor of History at the University of New Mexico, USA.

Sanabria offers a deeply detailed study . . . extensive notes and a remarkable bibliography. - Choice "Well-researched and -argued . . . a persuasive interpretation of the transformation of Spanish republicanism at a critical moment in its history. This is an excellent monograph based on solid research and a comprehensive approach to the topic." - The Catholic Historical Review "An excellent contribution to the study of the successes and failures of anticlericalism in Restoration Spain. Sanabria s study helps to place today s European church-state relations in historical context." - Michael Seidman, author of Republic of Egos: A Social History of the Spanish Civil War "Enrique Sanabria is to be congratulated for presenting an English-reading public with a careful study of one of the major political forces that divided modern Spain: anticlericalism. Scholars interested in the bitter controversies over religion and government will benefit from this well written and knowledgeable work." - Christopher Schmidt-Nowara, Magis Distinguished Professor of History, Fordham University"Enrique Sanabria's book carefully and convincingly unpacks the welter of political factions invested in anticlericalism as a catch-all belief and identity from which a modernized Spain could be constructed. Sanabria does a good job of connecting Nakens, a truly interesting character, to the continued survival of the Restoration system via his profound belief in anticlericalism as a unifying vehicle with which to challenge the temporal and moral authority of the Catholic Church. Republicanism and Anticlerical Nationalism also highlight the role of the press as the lightening rod for the development of political dissent and a unifying force for opposition to the politics of the Restoration." - David Ortiz, Jr., University of Arizona