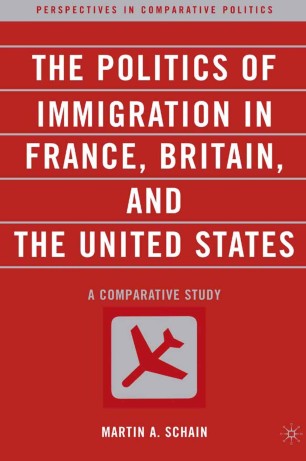 The Politics of Immigration in France, Britain, and the United States

Part of the Perspectives in Comparative Politics book series (PCP)

This book argues that although labour market needs have been an important element in the development of immigration policy, they have been filtered through a political process, the politics of immigration. The book explores the relation between policy and politics in France, the UK, and the US.

MARTIN A. SCHAIN is Director of the Center for European Studies at New York University, USA. He is the editor of Palgrave's series Europe in Transition and is the author or co-author of ten books, many published by Palgrave, including The Marshall Plan: Fifty Years After and A Century of Organized Labor in France.

"In this study Martin Schain scrutinizes immigration politics in three major Western democracies, from a refreshingly comparative standpoint. He relates the domestic politics and immigration policies of Britain, France, and the United States, vividly showing how these nations policies towards migrants developed and changed over many decades. This volume builds upon and goes beyond previous research, revealing issues and policy dilemmas that transcend any single nation, but that are difficult to discern without Schain s incisive comparative approach." - Christopher Mitchell, Professor of Politics, New York University

"Martin Schain s book is an immense achievement. It transcends the typical (but artificial) European/North American divide in immigration studies; is written with great clarity and persuasiveness; and it offers an account of immigration policy that rightly rejects overly deterministic structural accounts, placing the accent squarely on politics and the political process. This book should be read as both a theoretical explanation of the politicization of immigration and as an empirical overview of immigration policy and politics in France, Britain, and the US, one that is uniquely sensitive to the particularities of each case. It is indispensable for students of immigration." - Prof. Randall Hansen, Canada Research Chair in Immigration & Governance, Department of Political Science, University of Toronto

Martin Schain's book is a tour de force that should be read by all students of immigration policy. He provides a comprehensive, thoughtful comparative analysis in explaining the historic and current differences in the politics and policies of immigration in the United States, France and Britain, focusing on the impact of institutions, the role of different actors, and the dynamics between them. Schain has done a masterly job in examining the vital immigration challenges of our age, notably the ability of the liberal states to controls their frontiers and to integrate their new migrants. Yet beyond these topical issues, this book addresses important implications for how we should understand the question of migration itself." - Ariane Chebel d'Appollonia, Associate Researcher, CEVIPOF/Center for Political Research, Sciences Po Paris