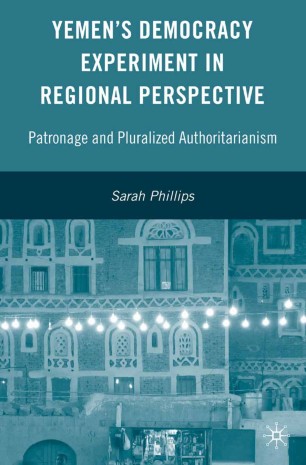 This study examines the nature of changes to Yemen's power structures, political dynamics and institutions since the intention to democratize was announced in 1990 paying particular attention to the role of Yemeni President Ali Abdullah Saleh.

SARAH PHILLIPS received her Ph.D. from the Centre for Arab and Islamic Studies, Australian National University, in 2007. She spent over a year conducting fieldwork in Yemen for her dissertation on processes of political reform and now works with the National Democratic Institute in Yemen.

"This study of current Yemeni politics is the work of a new, young scholar who has spent most of the time between late 2003 and the present researching and working in the Republic of Yemen. She has a command of the facts - has experienced many of them - and she has an analytical framework in which to make sense of them. The result is a book that captures and puts into perspective the Ali Abdullah Salih regime and the politics of Yemeni unification - and their problems and prospects." - Robert D. Burrowes, University of Washington (retired)

"This is an immensely important study not only for Yemen specialists, but for anyone interested in gaining a sophisticated and informed understanding of the complexities of democratization in the Third World. Through an adept reading of the literatures on authoritarianism and democratisation applied to the Arab World, Phillips has made a significant and timely contribution to the burgeoning field of International Relations scholarship on soft power and legitimacy. She has also reminded us of the importance of balancing theory with practice through her methodological mix of primary and secondary sources. This book indicates that there is no excuse for painting the Arab World in simplistic hues: Phillips' masterful study forges a path for all those readers seeking clarity amidst thecomplexity of Yemeni politics." - Michelle Burgis, School of International Relations, University of St Andrews, Scotland

"In the early 1990s Yemen was the poster boy of Arab democracy. Now the verdict is more mixed. What happened? The answer, as one might well imagine, is neither simple nor conclusive but Sarah Phillips provides one in about as clear-eyed and lucidly written a book as one might wish for." - Steven C. Caton, Director, Center for Middle East Studies, Harvard University

"In this marvellously nuanced work, Sarah Phillips is enlightening on both Middle Eastern politics and the constraints generally on democratisation. She demonstrates that Yemeni politics is a lively mixture of co-optation, coercion, tribalism, Islamist opposition, and electoral experimentation. Drawing on an intimate knowledge of state and society in Yemen and conceptually sophisticated, she depicts a resilient evolution that has built simultaneously on networks of patronage and a hybrid political order - neither uniformly authoritarian nor unequivocally liberalised. This is precisely the kind of study we need in order to understand the prospects for democratic transition in the Middle East, and beyond." - James Piscatori, Australian National University, author ofIslam in a World of Nation-States