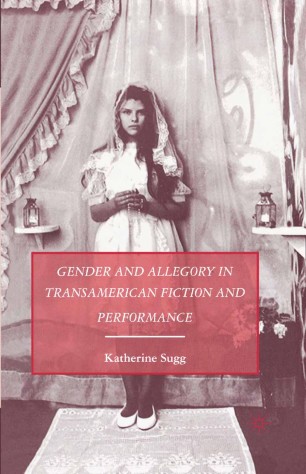 Gender and Allegory in Transamerican Fiction and Performance

By rethinking contemporary debates regarding the politics of aesthetic forms, Gender and Allegory in Transamerican Fiction and Performance explores how allegory can be used to resolve the "problem" of identity in both political theory and literary studies. Examining fiction and performance from Zoé Valdés and Cherríe Moraga to Def Poetry Jam and Carmelita Tropicana, Sugg suggests that the representational oscillations of allegory can reflect and illuminate the fraught dynamics of identity discourses and categories in the Americas. Using a wide array of theoretical and aesthetic sources from the United States, Latin America, and the Caribbean, this book argues for the crucial and potentially transformative role of feminist cultural production in transamerican public cultures.

"In Meditations on Quixote, Ortega y Gasset notes that the writer's choice of literary genre reflects 'at one and the same time a certain thing to be said and the only way to say it fully.' Sugg brilliantly affirms this insight by showing how writers such as Leslie Marmon Silko, Rosario Castellanos, Zoé Valdés, Cherrie Moraga, and Julia Álvarez, engage allegorical and performative strategies to say things that the novel can no longer say, to transcend identity politics and its positivist paradigms, to reposition the relations of consciousness and community. Furthermore, her transamerican perspective on these profoundly transamerican writers complicates the cultural connections that she (and they) make between genre and gender. This book will serve as a model for the comparative study of emerging expressive forms in and across the Americas." - Lois Parkinson Zamora, University of Houston

"Sugg's Gender and Allegory in Transamerican Fiction and Performance is itself an impressive performance. Critically and theoretically, it manages not merely to recover, but to reconceptualize and redeploy the productive work of allegory in a wide variety of mostly contemporary texts and performances. In doing so it demonstrates both allegory's versatility and resilience as a tool for future critical feminist work in such disciplines as cultural, performance and literary studies. Institutionally, it contributes quite valuably to the larger reconfigurations of both fields and archives, of feeling and of knowledge, currently under way in a number of intersecting scholarly fields." - Ricardo L. Ortíz, Director of Graduate Studies, Associate Professor of U.S. Latino Literature and Culture, Department of English, Georgetown University