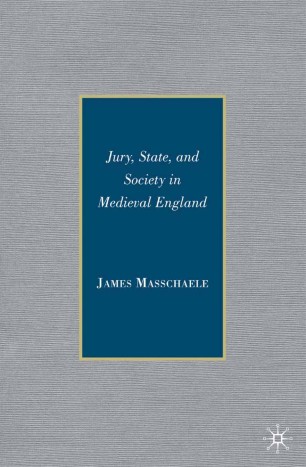 This book portrays the great variety of work that medieval English juries carried out while highlighting the dramatic increase in demands for jury service that occurred during this period.

JAMES MASSCHAELE is an Associate Professor of History at Rutgers University, Rome, Italy.

"James Masschaele s book is in part a synthesis of earlier scholarship but also in part itself an original work that makes a real addition to the existing literature." - Speculum

"This book explains the complicated development of the jury system of medieval England in a very clear and readable prose that scholars and students alike will appreciate. Masschaele offers illuminating comment on a wide range of subjects, including the socio-political implications of jury service, the importance of fairness and reliability in the growth of jury procedure, and the ways in which juries represented a partnership between local people and higher authorities. Particularly important is Masschaele's evidence that the rapid expansion of the jury system required the participation of so many men that royal officials had to widen the social base from which they drew jurors. He argues, therefore, that jury service was an instrument of state formation because of the regular contact and cooperation it entailed between the royal government and its subjects, including, by the late thirteenth century, many peasants from lower down the social ladder.This argument is, moreover, crucial in explaining the early and successful process of state formation in medieval England compared to its continental counterparts." - Maryanne Kowaleski, Joseph Fitzpatrick SJ Distinguished Professor of History and Director of Medieval Studies, Fordham University"A fine study, convincingly demonstrating the extensive contribution of peasants to the formation of the English medieval state." - Richard Britnell, Emeritus Professor of History, University of Durham